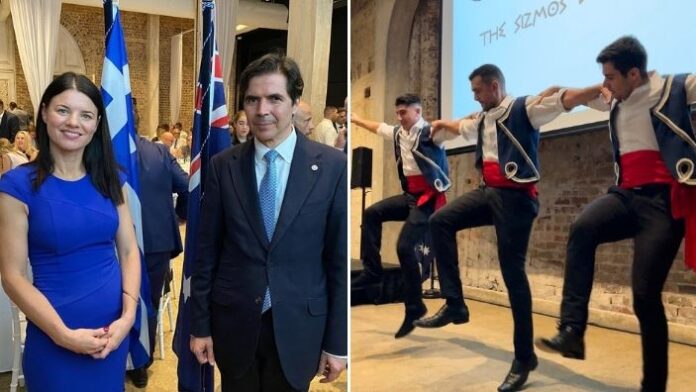 On Friday the 26th of March, the ‘Liberal Friends of Greece’ was formally launched by the Member for Reid, Dr Fiona Barbouttis Martin MP in presence of the Consul General of Greece in Sydney, Christos Karras and other distinguished guests.

Dr Martin hailed the event as a huge success.

“I am extremely grateful for everyone who could come along, it was a wonderful evening,” she said.

“Plato once said, ‘courage is knowing what not to fear.’ The Greeks who have migrated to Australia put aside fear, showing immense courage leaving their homes in search of a better life. Without the Greek community, Australian society wouldn’t be what it is today.”

There are nearly 400,000 people of Greek ancestry currently living in Australia, and just under 94,000 who were born in Greece now living here. This makes Australia home to one of the largest Greek communities in the world and makes Greeks the seventh largest ethnic group in Australia.

Who is Dr. Fiona Martin MP?

Dr Fiona Barbouttis Martin MP, a Sydney Greek Australian of Castellorizian heritage, is an Australian Liberal Party politician who was elected as Member of Parliament for Reid at the 2019 federal election.

Dr Martin, is a mum, psychologist and former small businesswoman, who has spent her life working to better the lives of people, supporting some of the most vulnerable children in our community. Her work has helped to treat a wide range of learning, developmental and behavioural difficulties that children experience.

Her father, George Barbouttis, was a professional soccer player and played for a number of clubs in Sydney, including Sydney Croatia and Panhellenic, as well as for a couple of clubs in Greece. He was selected for the Australian National team, but never played a representative game because of injuries.

“My dad was a coach for most of my childhood, so I spent many afternoons and evenings watching community sport, and the teamwork and collaboration that comes with it. I think that has had a strong influence on me today,” Dr Martin said in a previous interview with The Greek Herald.