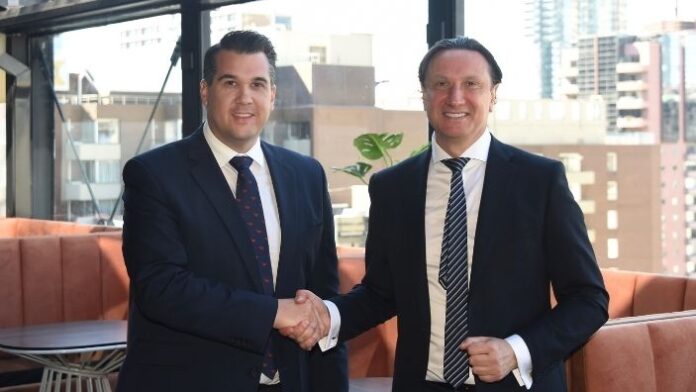 The Greek Community of Melbourne (GCM) recently hosted the Federal Minister for Housing and Assistant Treasurer, the Hon Michael Sukkar MP at its Lonsdale Street Greek Centre in Melbourne, according to a statement released by the organisation.

The Minister visisted the Greek Centre for the first time and was led on a tour of the 15-storey Centre culminating in a lengthy discussion at the roof top restaurant where he enjoyed a Greek coffee.

Minister Sukkar was greeted by GCM President Bill Papastergiadis and Greek Centre Director Jorge Menidis spoke of his Lebanese background at the hour-long meeting citing the many similarities between multicultural communities.

The Minister was effusive in his praise of the Greek Community. He was deeply impressed with the 15 storey cultural centre and in particular with the services that the Centre offered. He particularly felt that it was important that the GCM offered its services and spaces within the Centre to many other community groups. He regarded the Greek community as one of the key beacons of multiculturalism in Australia. He was deeply interested in the education and cultural programs of the GCM.

Minister enquired as to how the Greek community had been able to maintain its language services when many other ethnic groups struggled to do so.

Jorge Menidis gave a brief history of Greeks in Melbourne and the development of education services as a core practice of the GCM. Menidis explained how the education of third, fourth and fifth generation Greeks continued today and that the program now spread from pre-school programs such as ELA to the GCM’s active support of Tertiary education through connections with multiple Universities both here and abroad.  Of particular note was the imminent University fo Melbourne Hellenic Chair in Diasporic Studies that the GCM facilitated with Federal Gpvernment support.

The Minister was also briefed on the GCM’s outreach to emerging ethnic communities such as the South Sudanese noting that the GCM was keen to share with other emerging groups its aquired knowledge and learnings.

Minister Sukkar also spoke at length about his own upbringing and the fact that it was made up of friends from numerous ethnic backgrounds. He felt he had a lot in common with people of greek background.

Sukkar also touched on how COVID impacted Australia both socially and economically.  He was pleased to see the quick  financial recovery in Australia and the rebounding of employment.  He noted that Australia was one of the few countries globally that managed the outbreak of covid relatively successfully.

Bill thanked Minister Sukkar for making the time to visit the Center and equally,  thanked him for the interest he showed in the GCM’s program of activities and events.

Bill said “its important for organisations like ours to have the ear of Government. Through these conversations we can provide “on the ground” briefings on the key issues confronting ethnic groups. We can “bounce ideas and projects” with the country’s key decision makers and as we have seen in the past, this leads to direct action and results. Bill noted how successful the briefing was with Prime Minster Morrison some 2 years ago, which resulted in the announcement of some key grants.

Bill noted the similarities between the Lebanese and Greek communities and emphasised how the GCM’s language programs were a key component of cultural maintenance.

Bill also said that “it was equally heartening to see people of diverse backgrounds in Federal Cabinet.  The notion of diversity has to be applied broadly. We need to have people of different ethnic backgrounds in parliament so as to truly reflect the cosmopolitan nature of Australia.

It was agreed that this would be the first of many such meetings with Minister Sukkar so that dialogue and ideas could continue to be exchanged.