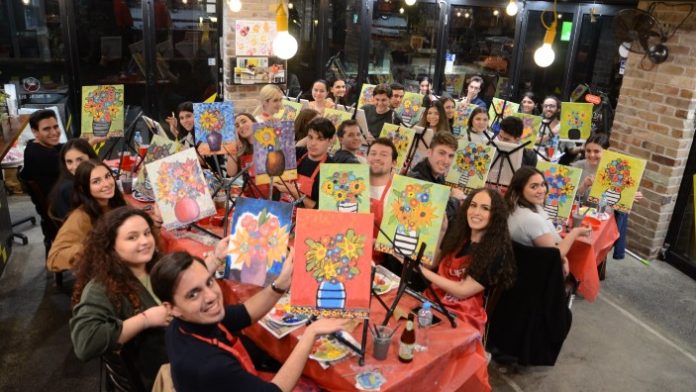 The Kytherian Youth Association (KYA) held its first-ever ‘Brushstrokes, Burgers and Beer’ night on May 24 and it was a huge hit with all the young people who attended.

Over 20 members of the association were spotted getting creative by painting their own versions of flowers in a vase, followed up by burgers and beer at the WellCo cafe in Leichhardt.

President of the KYA, Georgia Galanos, tells The Greek Herald that everyone had fun on the night as the mingled with friends and fellow Kytherians.

“I received many compliments about the event such as how it was very social and people mingled while achieving a creative outcome. Many had not attended a painting night and seemed to enjoy the atmosphere as well,” Georgia says.

The Youth President goes on to say that the association has a ‘Big Fat Greek Event’ coming up on July 4 as well and she encourages everyone to attend.

“I think it’s important to hold events like these as these smaller events encourage people to challenge themselves at a new type of activity, as well as enjoy each other’s company. These smaller events can be great to have a chat to new people,” Georgia concludes.