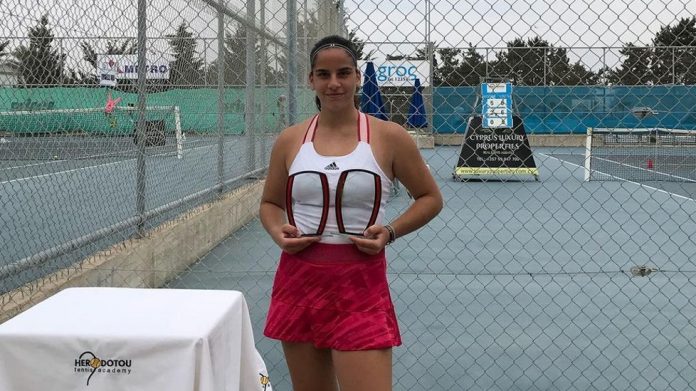 Modern Greek tennis stars by the likes of Stefanos Tsitsipas and Maria Sakkari have inspired a wave of new young guns looking to make their mark on the tennis world.

Dimitra Pavlou is one of them.

At only 17-years-old, Dimitra has impressed on the junior stage and is ready to turn pro.

The Greek Herald speaks exclusively with Dimitra to talk about her professional rise.

TGH: Why did you choose to play tennis?

Dimitra Pavlou: I started playing tennis when I was 6 years old, as my grandfather, Dimitris Kanellopoulos, was a tennis coach and playing the sport is, in a way, a family tradition.

TGH: Are you coming to Australia for the first time and which tournaments will you be attending?

TGH: Can you tell me some of your biggest moments from matches that you remember even today?

Dimitra Pavlou: I remember all the matches I played, but the most important are the matches with the National Team in the Pan-European Girls Under-16 Championship that, although I was 15 years old, reached the top 8. Also the first places I won in the Pan-Hellenic Junior and Women’s Championships, my participation at the age of 16 in the Women’s National Team and, of course, my last matches in professional tournaments through which I got a ranking in the WTA world women’s ranking.

TGH: Do you continue your studies? How do you do it?

Dimitra Pavlou: It is a bit difficult in Greece with the school as I am a student of the 3rd Lyceum, but I’m very lucky because the teachers and the Principal of my school support me and help me whenever I need it.

TGH: Do you have a goal in what you want to achieve?

TGH: How do you spend your free time?

Dimitra Pavlou: I spend my free time with my family and my friends. We like to go for walks in the Historic Center of Athens and watch theatrical performances.

TGH: Do you enjoy traveling?

Dimitra Pavlou: I really like traveling and meeting people but at the moment my travels are limited to those of sporting obligations.

TGH: Where do you imagine yourself in ten years, both professionally and in your personal life?

Dimitra Pavlou: In 10 years from now I imagine myself as a successful athlete and I would like in my personal life to have people around me who I love and they love me.

TGH: What message would you like to send to the Greeks of Australia?