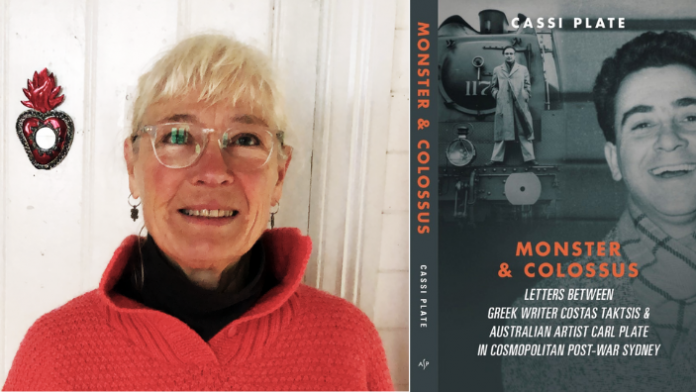 The event is entitled after her new biography on the friendship between ‘sacred monster’ Costas Taktsis and her father Carl.

Read more about their lives, who Dr. Plate is, and how to attend the event below:

Dr. Cassi Plate will present an online lecture entitled Monster & Colossus: Letters between Greek writer Costas Taktsis & Australian artist Carl Plate & their families in cosmopolitan post-war Sydney, on Thursday 16 September at 7.00 pm, as a part of the Greek History and Culture Seminars, offered by the Greek Community of Melbourne.

Costas Taktsis (Κώστας Ταχτσής), arguably the most important post-war Greek writer, referred to himself as a Sacred Monster. He called his life-long friend, Sydney artist Carl Plate, a committed internationalist and key figure in the post-war Australian modern art movement, the Colossus of Woronora. After Taktsis was banished from Australia, the friendship of these inveterate travellers – the writer and the artist – was kept alive through decades of correspondence.

Dr. Cassi Plate will talk about the poet and writer’s experience of Australia during the post-war wave of immigration. For Taktsis, Australia was a place of innocence, a new stage on which to reinvent himself, and the form of the Greek novel. On the contrary, Carl Plate (1909-1977) saw Australia as a prison from which he sought to escape, but a prison that enabled him to keep painting. Claimed as the first modern Greek novel, The Third Wedding, written largely in Australia, was dedicated to Carl and Jocelyn Plate.

Dr. Cassi Plate is a curator, writer, and former ABC broadcaster (Triple J, Radio National). She has taught and researched at UTS, the University of Newcastle, and the University of Western Sydney. Her previous book ‘Restless Spirits’ was the pilot for a ‘Thesis to Book’ initiative of the University of Sydney and publisher PanMacmillan. Her latest book Monster & Colossus was published by Australian Scholarly Publishing in 2020.

You don’t need an account to watch the live broadcast with any of the above services. However, if you want to participate in the Q&A at the end of the seminar you’ll need an account with the equivalent service in order to post your question in the comments/chat.