Dr. Melanie Fillios on what her excavations of ancient Greek sites show about the Bronze Age 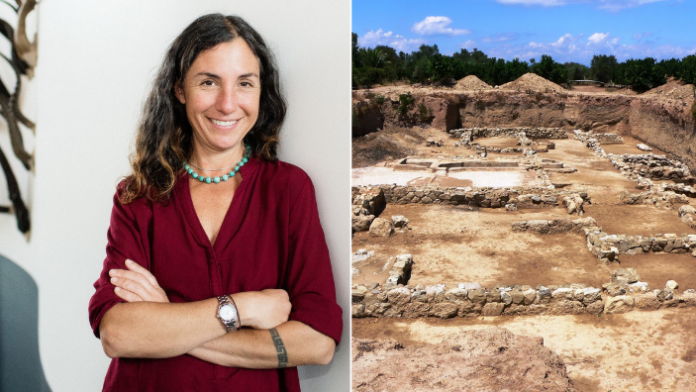 Dr Melanie Fillios is a senior lecturer in archaeology and paleoanthropology at the University of New England and has been drawn to the field of cultural archaeology since she entered college in the United States.

“I said, ‘I want to be an anthropologist!’, and my professor said, ‘What you want to be is an archaeologist. Come to my field school’,” she tells the ABC’s Conversations program.

“So I spent eight weeks in the high desert of Idaho,” she says.

“We had snakes, grassfires, no showers, one porta potty and tents filled with earwigs and I was hooked.”

She’s fascinated by hunter-gatherer societies and worked on digs in Greece for some years before moving to Australia to live and focus on understanding Australia’s megafauna.

Early on in her career, she travelled to excavate a site in the ancient Greek city-state Helike, in the northern Peloponnese, that dates back to about 2600 BC.

“The site happened to be in an olive grove about five metres below the surface of the ground,” she says.

“This site was really interesting because it’s mentioned by the classical sources of having been destroyed by an earthquake.”

“What we found at Helike was a lot of pigs… [which] were a really fascinating animal in antiquity.”

Dr. Fillios says these pigs tell us about the nature of social differentiation in the Bronze-Age society and how they mark a shift towards the time of kings and kingdoms in classical Greece.

“Pigs might have been a great way [for the Minoans] to maintain their independence from this burgeoning, complex state,” she says.

She also recalls the time she came across a heap of research-worthy decaying sheep carnage in a mountainous Greek village.

“Of course, in my naive and young state, the younger me said, ‘Wow! This is my opportunity to get a comparative collection!,” she says.

“The [disgusted local yiayiades] just looked at me like, ‘You awful, disgusting foreigner’.”

“That was probably one of the moments I should have questioned by choices in life,” she jokes.

‘It is an honour’: Theodoros Tsantalidis one of 2,400 new Australian citizens in Parramatta