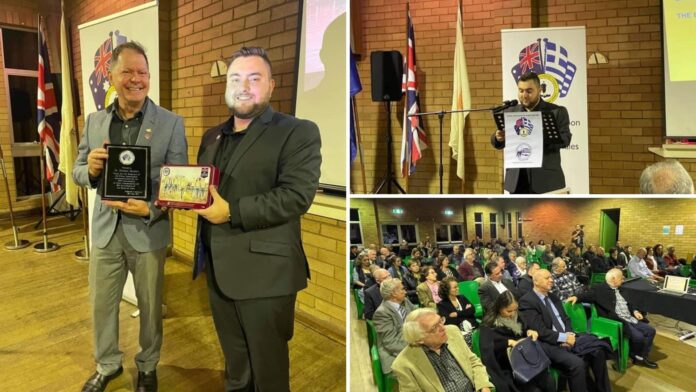 The Master of Ceremonies, Steve Siganakis, welcomed everyone to the night, followed by a welcome by the President of the Cretan Association, Terry Saviolakis, and the Secretary of the Joint Committee for the Commemoration for the Battle of Crete, Nick Andriotakis.

Of the 100 attendees were many leaders and presidents of Greek Australian Associations and communities. In attendance were Mr Konstantinos Yiannakodimos, Head of the Office of Public Diplomacy of the Consulate General of Greece to Sydney, and Councillor Claire Raffan, representing the Mayor of the City of Canterbury Bankstown.

Dr Alfred Vincent, a widely acclaimed philhellene, presented a talk on Crete’s involvement in the 1821 Greek Revolution and outlined the decades of struggles and turmoil until Crete’s final union with Greece in 1913.

Dr Michael Bendon presented a very interactive talk on the lasting impact of the Battle of Crete in WW2 and the continued underwater archaeological work and research being conducted to this day. He also presented many first hand accounts from ANZACs and Cretan locals who fought in the Battle.

Kelvin Bourke also gave a personal touch by giving an account of his father’s involvement in the Battle of Crete. Kelvin’s Father, Nick Bourke, was a runner for the 22nd Battalion.

After the talks, the 100 attendees were treated to dinner, including some traditional Cretan delicacies, made by the the Cretan Association’s Executive Committee. Then commemorative gifts and plaques were given to the guest speakers and guests who attended.