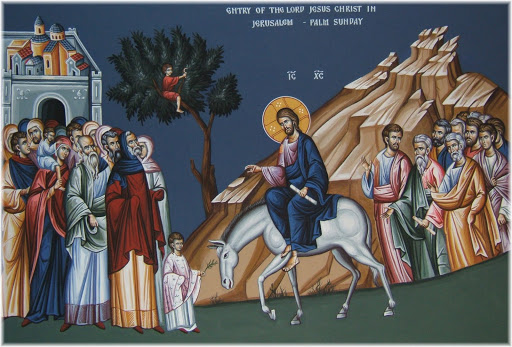 On the Sunday before the Feast of Great and Holy Pascha and at the beginning of Holy Week, the Greek Orthodox Church celebrates one of its most joyous feasts of the year. Palm Sunday is the commemoration of the Entrance of our Lord into Jerusalem following His glorious miracle of raising Lazarus from the dead.

Having anticipated His arrival and having heard of the miracle, the people went out to meet the Lord and welcomed Him with displays of honour and shouts of praise. On this day, we receive and worship Christ in this same manner, acknowledging Him as our King and Lord.

Typically given out in church, the woven palm crosses symbolise the Lord’s presence with the faithful, and are typically carried around by the faithful throughout the day.

While Palm Sunday still occurs during the Sarakosti (40 days of Lent), the Greek Orthodox Church typically allow people to consume fish, oil, and wine but not dairy products, eggs, chicken and red meat.

People had gathered in Jerusalem for the Passover and were looking for Jesus, both because of His great works and teaching and because they had heard of the miracle of the resurrection of Lazarus. When they heard that Christ was entering the city, they went out to meet Him with palm branches, laying their garments on the ground before Him, and shouting, “Hosanna! Blessed is he that comes in the Name of the Lord, the King of Israel!”

At the outset of His public ministry Jesus proclaimed the kingdom of God and announced that the powers of the age to come were already active in the present age (Luke 7:18-22). His words and mighty works were performed “to produce repentance as the response to His call, a call to an inward change of mind and heart which would result in concrete changes in one’s life, a call to follow Him and accept His messianic destiny. The triumphant entry of Jesus into Jerusalem is a messianic event, through which His divine authority was declared.

Palm Sunday summons us to behold our king: the Word of God made flesh. We are called to behold Him not simply as the One who came to us once riding on a colt, but as the One who is always present in His Church, coming ceaselessly to us in power and glory at every Eucharist, in every prayer and sacrament, and in every act of love, kindness and mercy. He comes to free us from all our fears and insecurities, “to take solemn possession of our soul, and to be enthroned in our heart,” as someone has said. He comes not only to deliver us from our deaths by His death and Resurrection, but also to make us capable of attaining the most perfect fellowship or union with Him. He is the King, who liberates us from the darkness of sin and the bondage of death. Palm Sunday summons us to behold our King: the vanquisher of death and the giver of life.

Palm Sunday summons us to accept both the rule and the kingdom of God as the goal and content of our Christian life. We draw our identity from Christ and His kingdom. The kingdom is Christ – His indescribable power, boundless mercy and incomprehensible abundance given freely to man. The kingdom does not lie at some point or place in the distant future. In the words of the Scripture, the kingdom of God is not only at hand (Matthew 3:2; 4:17), it is within us (Luke 17:21). The kingdom is a present reality as well as a future realization (Matthew 6:10). Theophan the Recluse wrote the following words about the inward rule of Christ the King:

“The Kingdom of God is within us when God reigns in us, when the soul in its depths confesses God as its Master, and is obedient to Him in all its powers. Then God acts within it as master ‘both to will and to do of his good pleasure’ (Philippians 2:13). This reign begins as soon as we resolve to serve God in our Lord Jesus Christ, by the grace of the Holy Spirit. Then the Christian hands over to God his consciousness and freedom, which comprises the essential substance of our human life, and God accepts the sacrifice; and in this way the alliance of man with God and God with man is achieved, and the covenant with God, which was severed by the Fall and continues to be severed by our willful sins, is re-established.”