Christina Bacchiella: Making her mark on Indigenous education and the creative industry 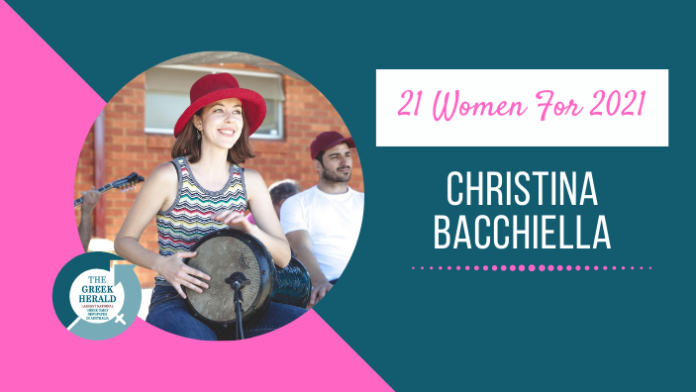 Christina Bacchiella describes herself as a third generation Greek-Italian Australian “who is helplessly in love with Greek music, art, language and humour.” This love goes straight into several creative projects she’s worked on, including being the founder of Sydney Greek Jam and the co-founder of Greek Fringe.

But that’s not all she’s known for.

More recently, Christina has also been recognised for her work in Indigenous education in engineering as the Community and Engagement Co-ordinator at The University of Sydney’s Indigenous Australian Engineering School (IAES). This is a role she’s incredibly proud of and something she says inspires her to delve deeper into her own Greek-Italian roots.

To find out more about this (and more), we spoke exclusively to the 33-year-old for our special ’21 Women for 2021’ series. Here’s what she had to say…

1. What does your role in Indigenous education involve?

In my specific faculty role of Community Engagement Coordinator, I project manage the university’s Indigenous Australian Engineering School (IAES) in collaboration with Engineering Aid Australia. It’s a role I love as I get to see Indigenous students in Years 10 to 12 get real-life experience in engineering through the IAES education program.

During the IAES, Indigenous students from across Australia live on campus for six days to get a real taste of university life. The students are accompanied by “house parents” from engineering backgrounds, who have been through the IAES. They also get access to prominent STEM academics at the university and visit engineering companies such as Sydney Metro.

The whole program creates an exciting environment for Indigenous students to learn how engineering can improve our communities, to meet engineering role models, and gain insights into the opportunities engineering can deliver as a career.

In addition to these schools, I also run other initiatives to ensure equal opportunity for prospective students and promote diversity among the student population at the University.

2. As a woman, how does it feel to be working in the field of Indigenous education?

Women are motivators for change within communities. Grandmothers and Aunties in Indigenous communities are often the strong ones instigating social change, furthering culture and nurturing youth. A lot of people that work in areas of social justice are women. I have had positive experiences working in this field with both men and women who are champions for change. It’s been extremely rewarding to see the increased number of young Indigenous students coming through the program and taking up tertiary study in engineering.

3. Do you find your Greek-Italian heritage helps you connect with Indigenous students more?

Having been raised in the context of different cultures, I feel I am more aware and have great respect for cultural differences. My instinct for social justice acknowledges that Aboriginal and Torres Strait Islanders have lost contact with aspects of their culture. The richness of Indigenous culture has prompted younger generations to reengage with their culture and this has also inspired me to delve further into my roots.

4. Tell us about Sydney Greek Jam and Greek Fringe. How did you become involved in them?

I have been lucky enough to be able to travel to Greece frequently. Live music is omnipresent over there, in bars, taverns, venues and on the streets. I also missed the acoustic nature in which people enjoy music in Greece. Intimate and unplugged – the best! These experiences and my longing for them are what prompted me to start Sydney Greek Jam, to try to recreate the atmosphere that I crave.

The Greek Fringe recently came into being as I felt there was a lack of contemporary and alternative Greek music and art among the diaspora. The connections made through the jam and my involvement in the Rebetiko Festival, equipped me with the experience and drive to start Greek Fringe – a portal to contemporary Greek culture from around the globe.

Co-founder Con Kalamaras and I are extremely touched by how well the initiative has been received. This project is funded by the Hellenic Museum in Melbourne and has attracted media partners in New York, UK and Greece thereby, creating a global community who appreciate Greek music and art.

Collaborations with people around the world has meant greater exposure for the artists that we feature and has allowed our audience to learn more about the hidden talents that exist in and out of Greece.

5. Does being a Greek woman influence your work in the creative arts industry?

I would say that my cultural roots are what drove me to get involved in the creative industry in the first place. I am so passionate about the evolution of the musical traditions of Greece that I felt a strong urge to share this with the world. And so, Sydney Greek Jam and Greek Fringe came into being!

6. How would you encourage other women to get involved in Indigenous education and music?

It’s about gaining a deeper understanding of the barriers Indigenous communities face and addressing issues in a genuine spirit of collaboration.

As for music, I’ve observed at our jams that there is a great imbalance of male to female instrumentalists. Yes, we have many female singers, but very few girls come along with an instrument. It would be great to see more chicks with picks!

I would encourage people who want to learn music to have no fear, grab an instrument, find a mentor and dive in! Don’t let age, shame or gender stop you. Our jams embrace people who have the will to learn. Everyone is welcome from novice to professionals. Keep an eye on Sydney Greek Jam FB page to participate.