Cheong Liew: From accidental grill chef at ‘The Iliad’ to Australia’s culinary icon 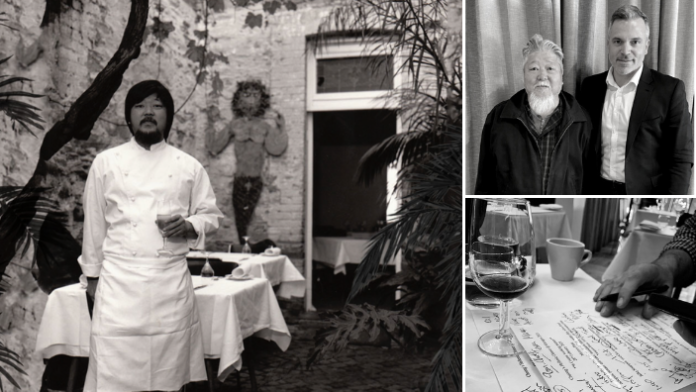 He speaks passionately about the use of lemon and the importance of seasoning in cooking, like a Greek would do.

But Cheong Liew’s relationship with the Greek cuisine is a deeper one.

Three years later, during a school break he visited his brother Khai who was studying in Adelaide and was working at a newly opened Greek restaurant, ‘The Iliad’.

Considered as one of the top venues in town at the time, The Iliad used to attract and cater for more than 400 patrons per day.

The beginning of Liew’s culinary journey

“One afternoon the restaurant was busy and my brother’s house mate, who was also working there, asked me to go and give them a hand. He told me they wanted me to be the grill chef for the night,” Cheong, 72, tells The Greek Herald.

“I knew nothing about Greece, Greek food or the culture then but I had some cooking experience as a kitchen hand from my parents’ restaurant in Kuala Lumpur.

“I saw that many Greek dishes -like grills- were prepared on the spot and this was similar to the way many foods are prepared in Malaysia. At the end of this night, the chef was very impressed by my coordinating in the kitchen and how I presented the dishes,” he says.

To learn more about the food and familiarise himself with the names of the dishes he bought a cookbook.

Later on, the restaurant’s well-travelled Greek chef went on and gifted him a Larousse Gastronomique French cooking encyclopedia.

“He [the chef] inspired me to learn more about the techniques and the architecture of French cuisine and The Iliad was the restaurant that inspired me to cook professionally,” Cheong says.

A migrant’s rise to fame

In 1975, Cheong Liew became the owner of the popular Adelaide restaurant Neddy’s.

Drawing on his Malaysian heritage and cross-culinary adventures, he created a multicultural menu that was one of the forerunners of the East-meets-West fusion.

The restaurant closed in 1988 and Liew went on to become a cookery teacher.

In 1995, he opened The Grange restaurant at the Hilton Hotel in Adelaide and during this time, he was awarded the Medal of the Order of Australia “for service to the food and restaurant industry through involvement in developing and influencing the style of contemporary Australian cuisine”.

He has also been honoured as “one of the ten hottest chefs alive” by the American Food & Wine Magazine and inducted into the Hall of Fame in the World Food Media Awards.

Nearly half a century after his culinary journey at ‘The Iliad’, the Adelaide food icon will be the Guest Chef for a series of lunch events organised by the Foundation for Hellenic Studies as part of celebrations to commemorate the 200-Year Anniversary of the commencement of the Greek War of Independence.

“When I started cooking Greek, I only knew about Alexander the Great. I have learnt a lot more since,” says Cheong.

“A recipe is not enough. You need to use your senses to cook and to be open to learn about other people and cultures,” he concludes, as he finalises the menu for the events that are set to be held at George’s on Waymouth on February 21, 28 (both fully booked) and March 7 (subject to demand).

*The net proceeds from the lunch events will support education and cultural initiatives of the Foundation for Hellenic Studies. For more information email info@hellenicstudies.com.au