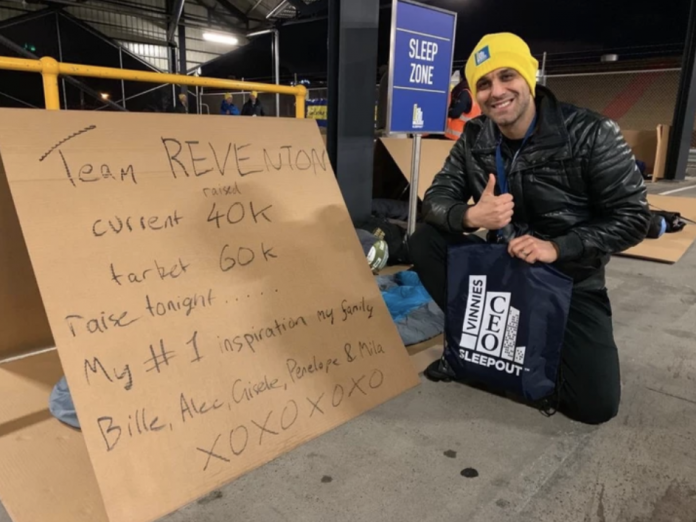 On Thursday 20 June Melbourne based Greek Australian Chris Christofi, CEO of Reventon joined leaders in business, community and government and slept without shelter on one of the longest nights of the year to help change the lives of Australians experiencing homeless as part of the Vinnies CEO sleep out.

This was his second year sleeping with the homeless having raised 40k last year and an impressive 54k this year. This year a record total of $7.19 million has been raised to help break the cycle of homelessness and poverty in Australia as part of Vinnies CEO sleep out Chris Christofi is a serial entrepreneur, international speaker, wealth coach, philanthropist & property investment.

Chris shared his experience with The Greek Herald:

That the homeless face so many challenges. I struggled through one cold winters night in Melbourne however think of the large number of homeless people doing that every night on the streets. I believe that no one should ever look down at someone who is sleeping on the streets because circumstances could change, and it could happen to anyone. I hope that if I were to find himself homeless that people would smile or lend something warm for me to use, not just hurry past.

What motivated you to do the sleep out?

I wanted to raise money and awareness. We live in the most livable city in the world yet so many are homeless. Being in a privileged position feels it is my responsibility to give back and make a difference. I have personally donated $20,000 as well as my company Reventon, donating 50 cents to every dollar raised.

What was your experience of the night?

Overall it was an amazing experience. I walked away with freezing hands and feet. I was ill before the sleepout and came out a lot sicker than when I went in. However, all that said it makes me realise how hard sleeping on the streets is for so many people in Melbourne. If asked to sleep out again I would do it again in a heartbeat.

What stood out for you from the sleep out?

That there are over 250 good people that want to help make a difference and raise awareness. The Sleepout made me realise what a diverse and compassionate society we live in.