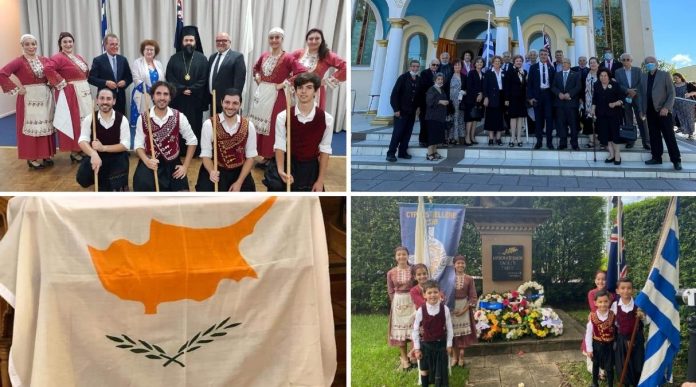 Cypriot communities across Australia have honoured the heroes and heroines of the EOKA (National Organisation of Cypriot Fighters) struggle against British colonial rule with a number of church services and wreath laying ceremonies.

In Melbourne, there was a special memorial service and wreath laying ceremony at the Greek Orthodox Parish of St Andrew the Apostle in Forest Hill to honour those who lost their lives in the EOKA struggle.

But that’s not all. Here is The Greek Herald‘s list of what else was held across Australia to mark the significant event

In Queensland, a memorial service and wreath laying ceremony was held to mark the 67th anniversary of the EOKA struggle.

There was also a Divine Liturgy held at St George Greek Orthodox Church in Brisbane, which was presided over by His Grace Bishop Emilianos of Meloa.

The wreath laying was attended by the High Commissioner of the Republic of Cyprus in Australia, Martha Mavrommatis; the Honorary Consul of Greece in Queensland, Dimitris Raftis; the President of the Cypriot Community of Queensland, Stathis Zambas, and members of the board; as well as other representatives of Cypriot and Greek organisations of Queensland.

The formal proceedings were followed by a commemorative event at the Community centre, with speeches, a short film from diaspora children all around the globe celebrating the EOKA struggle, poems and traditional Cypriot dancing by the Community youth.

The Cyprus Club, the Cypriot Community and other Cypriot Associations of NSW honoured the 67th anniversary of the EOKA struggle for Cyprus with a Doxology and memorial service in honour of the fallen heroes.

The Doxology, which was performed on Sunday, April 3 at the Church of the Annunciation of Our Lady in Redfern, was followed by the laying of wreaths at the cenotaph located on church grounds and coffee in the adjacent hall.

Thalia Achilleos, the wife of the President of The Cyprus Club Panayiotis Achilleos, who was unable to attend the ceremony, was emcee for the day.

Among the officials who laid wreaths were the Treasurer of the Cypriot Community of NSW, Andros Antoniou representing the High Commissioner of the Republic of Cyprus in Australia, Martha Mavrommatis; Giannis Tsingos on behalf of His Eminence Archbishop Makarios of Australia; Costas Giannakodimos representing the Consul General of Greece in Sydney Christos Karras; as well as the President of SEKA NSW, Agapitos Passaris and a number of other representatives of cultural and expatriate organisations.

With a doxology and memorial service led by Grace Bishop Silouan of Sinope accompanied by St George Thebarton Parish Priest Father Diogenis Patsouris, Cyprus Community of SA honoured on Sunday those who lost their lives in the EOKA struggle.

Mr Evdokiou spoke to The Greek Herald after the Doxology and said it is important to continue to remember and commemorate the heroes who fought for the freedom and independence of Cyprus.

“Of course we achieved an independence that may not have been what we wanted. After 48 whole years, we are still under the occupation of the Turkish invader,” Mr Evdokiou said while making a parallel between Russia’s invasion of Ukraine and that of Turkey in Cyprus.

“The invasion of Ukraine brings back memories that we had then, in 1974, and we continue to live this nightmare,” Mr Evdokiou stressed.

“We condemn the invasion of Ukraine but it is also a great hypocrisy by the great and powerful who impose sanctions on Russia and ignore the Cyprus issue. Where were these sanctions and this upheaval of the world when Turkey invaded Cyprus?” Professor Evdokiou said.

Share
Facebook
Email
Twitter
Pinterest
Linkedin
WhatsApp
Viber
Print
Previous articleCr Zoi Tsardoulias: We want to pay tribute to Greeks who made Marrickville what it is today
Next articleUS asks Cyprus to transfer its Russian-made weapons to Ukraine