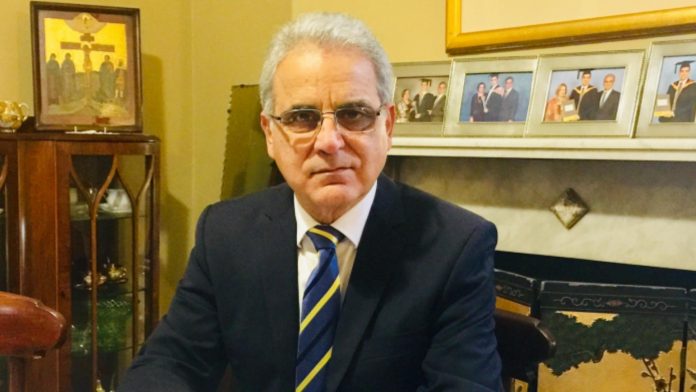 With the election of the new President of the Cyprus Community of NSW, Andrew Costa, The Greek Herald sat down to speak with him about his plans for the future of the Community.

In his interview, Mr Costa speaks openly about the priorities of the new Board of Directors, the current challenges faced by the Community, and the proposed development of The Cyprus Club in the Sydney suburb of Stanmore.

1. As newly elected President and board what are the immediate priorities / changes you would like to implement?

Our first priority is to get the rezoning done and to resume and reinvigorate community activities and events to bring our members back to the Club after the COVID isolation. To do this, it is critical we put the Community back on a stable financial footing whilst revitalising our building and its facilities.

We also want to:

2. What do you consider to be the club’s greatest strengths?

The members. Our members are passionate about their Club and their Community. They want to be involved and they want the Community to continue into the future, albeit in a more modern way, for their children and grandchildren.

They don’t want to lose their periousia and they don’t want to throw out the baby with the bathwater by focusing only on the commercial side of their assets. By that I mean the members, through their decisions and their votes, are saying we want the Community to stay at Stanmore and we want Community facilities that reflect and continue the heritage of Cypriots in Australia and can be shared with the wider community.

Last year research was conducted on member’s attitudes on this very question. Their responses clearly told us that they want to stay at Stanmore and modernise and expand our facilities and programs. Some terrific ideas were expressed through this research and we will take them on board. The members are excited about the potential the future holds for our community.

3. What do you consider to be the biggest challenges of the club at present?

There are several challenges but I believe the most important is to ensure our community is fully involved and supportive of the process that has already begun. By this I mean the process to transition and transform the Cyprus Community of NSW into a 21st century ethnic community centering ourselves on the material and community legacy that our forefathers built up for us with their hard work.

If we meet this challenge then I believe the other challenges will fall into place. These include the rezoning and ultimate development, financial stability and sustainability and the provision of programs, activities and resources that meet our member’s current and future social, cultural and educational interests.

The charity status will remain in place so long as the Community can fulfil its obligations to its members. These include our commitment to SEKA and the Justice for Cyprus cause, supporting our community activities though Greek language schools, Greek dancing lessons, our local soccer team the Stanmore Hawks, food and wine festivals and other social, cultural and educational initiatives.

Our efforts to build strong ties with Cyprus on all fronts education, sport, research, the arts, and political support will continue.

5. Concerns were raised during the campaign period regarding lobbying for justice for Cyprus. What is your understanding of SEKA? How will the current board work together in support of this subcommittee?

Justice for Cyprus, the cause and the SEKA Committee, is part of who we are, it is the fabric of our Community.

The support of local and overseas politicians is just as important as the support we have garnished for decades from political institutions, mainstream media, the arts, academia, unions, the media, business and the wider community.

SEKA’s role has been pivotal to keep the issue on the political radar, on the agenda in many forums, not just between ourselves, but to the wider community and beyond.

Every Board must pursue the cause with all its energy and resources, and this board is no different.

This Board is unique, we have a former secretary of SEKA who has been an active lobbyist for the cause, plus new directors with the energy, insight, skills, knowledge about the cause, a solid grasp of the dynamic geopolitical factors at work today, with their own network of contacts that over time will enhance our efforts.

Beyond the July events, we are looking at producing online learning module on “Cyprus” to inform the younger generation, in addition to organising briefings to online influencers and opinion leaders.

Currently SEKA is preparing for the July 20th commemoration of the 1974 invasion. Plans are in motion for a fundraising evening on July 17, a memorial service on July 24 followed by a wreath laying ceremony and an anti-occupation gathering at the Community building, as well as other activities that are being advertised.

6. We understand the previous board entered into an exclusivity agreement with Platino, the proposed developer of the Stanmore site. What is the status of this? Has the board conducted due diligence and have any further outcomes been reached?

The Exclusivity Agreement was signed in the period leading up to the May 29 elections. It covers a four month period and in that period the due diligence will be conducted by both sides. At this early stage there is little more we can say. Certainly at the end of the period we will report back to the members and be guided by their decisions.

7. Can you discuss with us some of the details of this agreement?

It’s an arrangement to give both parties the opportunity to undertake a due diligence and get a much more clearer picture of what may be on the table from both sides.

The current position, which has been the position of past Boards, is possibly best articulated by the members back in 2019 at Extraordinary General Meeting is to “get the rezoning.”  Without the rezoning not much will change for the 9000 plus sqm Stanmore site.

Members will always guide us as to what happens after we get the rezoning, and we hope the rezoning will deliver the opportunity to accomplish a very special Inner West precinct, much more than another property development, but an active, accessible, landmark for all Greeks, for our members, our neighbours and the wider community.

This of course is subject to what will come out of the rezoning process, which we have recently made representations to the authorities to solidify their support and drive an outcome.

We are on record that the incoming Board will honour this Exclusivity Agreement, this does not distract us from the aim to get a rezoning which will give the Community a precinct of significance.

9. The Cyprus Club recently called out members to assist in providing feedback on the planning proposal submission to council. Which items can members provide feedback for? How can members have their say?

Unfortunately the community consultation process conducted by Inner West Council closed on 19 June. It coincided with the election period and the handover from the outgoing Board to the newly elected Board. We understand that despite this, the responses Council received were largely supportive of the Rezoning application though of course, there were also local residents concerns about issues like parking and density of any proposed development.

Next month The Community will be hosting a number of events to mark the 48th year of occupation of Cyprus by invading Turkish forces.

Next Friday, June 24, the club will be hosting a function to celebrate the birthday of our oldest member Mr Evripidis Mouxouris.

October 1 is the birth of the Republic of Cyprus, and we are planning to celebrate the with a “Dinner Glendi” Cypriot style on the night. We have other events in the planning stages from movie nights to Cypriot poetry competitions, a “Haloumi  Festival” and much more.

11. How does the club plan to retain existing members and attract new ones?

I have discussed some of our plans on this issue in answer to your previous questions. It is very important that we not only maintain current our programs and activities, but we add to these and find ways to make them more relevant to the wider community.

For example, we are currently discussing expanding the Greek language school to include adults who are interested in learning Greek. We are hoping to hold lectures and talks on the Cypriot diaspora and on Cypriot history.

We want to honour and celebrate our members and their achievements. There are many ideas and now we need the time and support of the members to realise them.