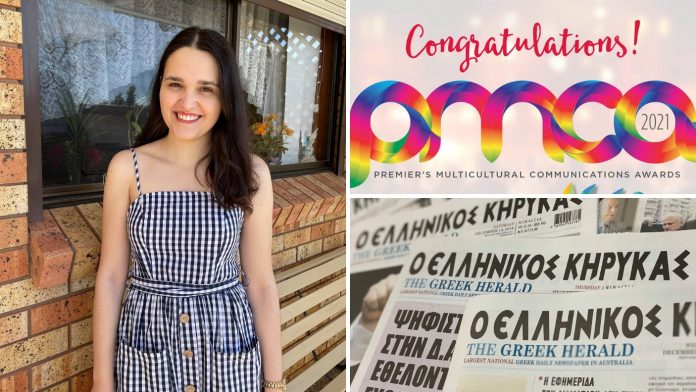 Stories of survival in the face of persecution and investigative reports about scams targeting diverse communities are among the winners of the 2021 Premier’s Multicultural Communications Awards.

Among the winners was The Greek Herald’s own digital journalist, Andriana Simos, who won Best Audio-Visual Report and was named Young Journalist of the Year.

The Greek Herald was a finalist in the Publication of the Year category together with four other finalists.

“These awards recognise the vital role our multicultural communicators play in delivering critical information and connecting with our diverse communities,” Mrs Ward said.

“Our multicultural media professionals have been tireless in sharing crucial health messages throughout the pandemic and have been instrumental in helping to keep our community safe.

“I commend this year’s winners and finalists and would like to thank them for their ongoing support in communicating with diverse audiences across NSW.”

Minister Ward congratulated the winners and finalists for bringing a voice to topics such as racism, migrant exploitation and the impact of COVID on the state’s diverse communities.

“I am delighted that the NSW Government is the only state in Australia to recognise multicultural communicators with a stand-alone awards program,” she said.

Young journalist, Andriana Simos, said she is incredibly honoured and proud of this recognition.

“When NSW Minister for Multiculturalism, Natalie Ward, first called me to tell me I had won Young Journalist of the Year and Best Audio-Visual Report in the 2021 Premier’s Multicultural Communications Awards, I was in complete disbelief,” Miss Simos said.

“Since the beginning of my journalism career, I have always believed in the power of a community and its people, so to be given an award for my reporting on the Greek community is an absolute honour and something I will always cherish and not take for granted.”

Miss Simos applauded all nominees and fellow Greek Australian, Mikala Theocharous, who was finalist for the Alan Knight Student Award, and thanked her family and colleagues.

“This award would not be possible without the continuous support of my amazing family, my work family at The Greek Herald, friends and members of the Greek community who I have interviewed in my nearly two years at the newspaper,” she said.

The achievements of the 2021 winners will be recognised at the Premier’s Harmony Dinner next year.