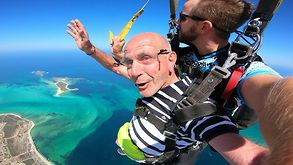 Kleanthis Karelis made the bold journey from Greece to Australian in 1964 at the age of 21.

Since then, his zest for adventure did not dull. Five days ago, the 80-year-old fulfilled his dream of skydiving, as a birthday gift from his children. He flew a 14,000 foot parachute into Jurien Bay.

Throughout his life, the keen sportsman and long-distance runner has constantly sought active thrills. In 2016, at the age of 77 Kleanthis ran a 12km marathon in Perth for charity – dressed as a teacup.

Kleanthis Karelis was born in Serres in 1939. His father fell victim to the rebellion and his mother died a few years after his birth, which led Mr Karelis to be adopted by his uncle.

At the age of 6, his uncle could not withstand the financial pressure of raising a child, which saw Kleanthis seek residence in the Children’s Orphanage in Thessaloniki.

He was raised at the orphanage until 18, and attempted to make it on his own, until the opportunity to come to Australia at 21 was presented.

At Freeman’s Harbour, a team of football scouts boarded the boat looking for players. Conveniently, Kleanthis had played in Greece at the Second National level, and was scouted in Perth.

Thus, his life’s adventure in Australia commenced, and he never lost his thirst for spontaneity.