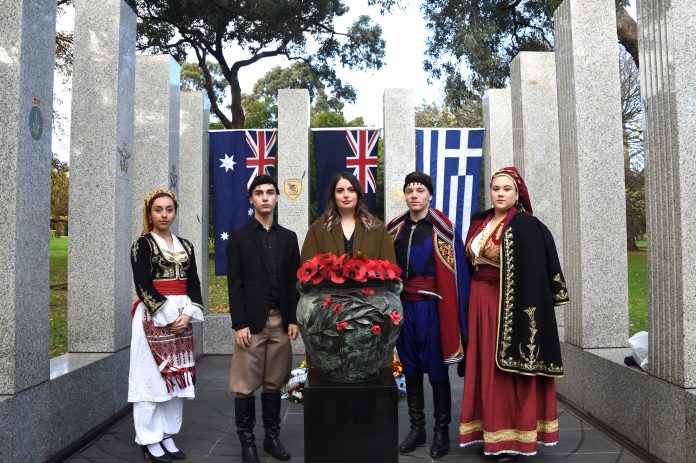 Held at Melbourne’s Australian Hellenic Memorial, only 10 people could attend the ceremony due to COVID-19 restrictions, however, everyone’s thoughts and prayers were with the Cretan people on the day as people remembered what they had endured in 1941 during the battle.

The President of the Cretan Youth of Australia & New Zealand, Ms Polina Nikolakakis, had the role of master of ceremonies and welcomed everyone for attending even at such short notice. The Consul General of Greece, Mr Dimitris Mihalopoulos, conveyed his brief symbolic message to the small group.

Wreaths were laid in memory and with gratitude to the fallen ANZACS and Cretans who fought heroically in the name of freedom and democracy defending the island of Crete.

The ceremony concluded with the reciting of the ode by war veteran Steve Kyritsis and the playing of the Greek and Australian national anthems.

READ MORE: May 20: Commemorating the Battle of Crete.

On Sunday 24th of May, at 11 am, a wreath laying ceremony will be held for the ANZACS of the Battle of Crete at the Shrine of Remembrance in Melbourne. The wreath will be laid by the Military Guard of the Monument (Shrine Guards) on behalf of the Cretan Federation of Australia & New Zealand inside the cenotaph of the Shrine of Remembrance. The Greek flag will wave on the central masts. You can watch the ceremony live on the day here.

The Cretan Youth of Australia & New Zealand have announced the Annual National Art Competition to commemorate the Battle of Crete. Participants are encouraged to research the Battle of Crete and portray a scene or an iconic image of the battle, including the ANZAC involvement. Participants can be as creative as possible, using any form of handmade art. Artworks must be anonymous. Please attach your name and details within the email but not on the artwork. Entries from previous years are not permitted to be re-submitted. All works need to be sent through to the email address cretanyouthausnz@gmail.com by the 24th May to be included in the competition. Any queries please contact the National Youth President, Ms Polina Nikolakakis.

The events for the Battle of Crete in 2021 in Australia will take place in April. Anyone who wants to participate to the trip to Greece for the 80th anniversary of the Battle of Crete please contact the Federation Council through email president@cretan.com.au or call on 0419856736.