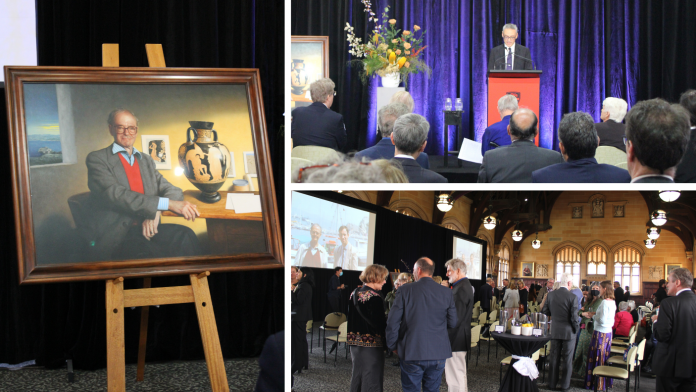 A heart-warming memorial in honour of the late Professor Alexander Cambitoglou AO was held at the University of Sydney’s (USYD) MacLaurin Hall on Wednesday afternoon.

On the day, over 100 people were in attendance including the Press Counsellor at the Consulate General of Greece in Sydney, Costas Giannakodimos, and Archdeacon Athenagoras Karakonstantakis, representing His Eminence Archbishop Makarios of Australia.

They, along with many other academics, mingled at the start of the event and shared touching stories about Professor Cambitoglou, who passed away in 2019 at the age of 97.

He was the founder of the Australian Archaeological Institute at Athens (AAIA) at USYD and left a bequest of approximately $6 million to the facility upon his death.

The formal proceedings were then kicked off by the Director of the AAIA, Dr Stavros Paspalas, who introduced a number of close friends and colleagues of Professor Cambitoglou to the stage to give speeches.

Dr Paspalas himself, as well as the Chancellor of USYD, Belinda Hutchinson AO, spoke passionately about the life of Professor Cambitoglou and his contribution to the AAIA, which is a research and education facility focused on Greek and Mediterranean studies with an emphasis on archaeological fieldwork.

READ MORE: Dr Stavros Paspalas on the future of the Australian Archaeological Institute at Athens.

The Chancellor described how the Thessaloniki-born Professor was the first person of Greek background to be appointed to a university professorship in Australia as Professor of Classical Archaeology in 1963. He also taught at USYD from 1961 to 1989 and was curator of the Nicholson Museum for 37 years from 1963 until 2000.

“Many Australian students went on to become professional archaeologists and owe a great deal of their experience and their careers to the work they did [during these projects].”

Dr Paspalas agreed with the Chancellor and said Professor Cambitoglou’s legacy “is multi-faceted.”

“Alexander Cambitoglou’s life is one of struggle, commitment and achievement. His legacy is, to quote Thucydides, ‘a possession for all time’,” Dr Paspalas said.

Following the conclusion of these informative speeches by the Chancellor and Dr Paspalas, a number of other colleagues of the Professor also took to the stage to share some personal anecdotes and memories they shared with him.

All of them drew a picture of a stubborn but kind man, with a dry sense of humour.

Emeritus Professor Conroy shared how she first met Professor Cambitoglou in 1962 when she was only an 18 year old university student. Now, she says, she’s able to reflect back on their friendship and recognise that he was “a driving force” in her life.

Others, such as Emeritus Professor Clarke, recalled how whenever he met with Professor Cambitoglou and asked how he was feeling, “he would reply with an expressive shrug of the shoulders and say, ‘we are not immortal’.”

“I think we can confer that, through the course of his 98 years, Alexander remained humorous to the end,” Emeritus Professor Clarke said.

Last, but not least, was Professor Garton who summed up Professor Cambitoglou perfectly when he explained how “there was one of doing things and that was the Alexander way, but he was able to mask that stubbornness with extraordinary charm.”

This comment received a murmur of agreement and laughs from the audience before the formal proceedings wrapped up and people enjoyed some light refreshments and continued to reflect on the extraordinary life of Professor Cambitoglou.