‘What I try to convey with my works is their moral greatness’: Sculptor Nikos Floros 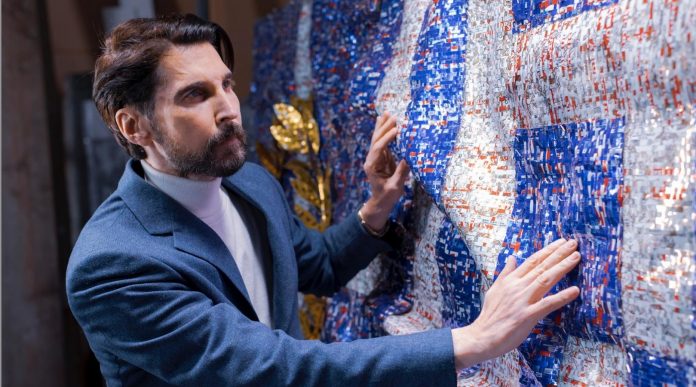 The St Basil’s ‘1821 Greek Art Exhibition’ held in collaboration with the Athens War Museum concluded a few days ago having counted more than 1500 visitors and many distinguished guests including Archbishop Makarios of Australia, Ambassador of Greece to Australia Georges Papacostas and NSW Governor Margaret Beazley.

The artworks of internationally acclaimed sculptor Nikos Floros ‘Heroes Made of Metal’ gathered attention not only for their uniqueness but also for their boldness and creativity.

Mr Floros spoke to The Greek Herald about his art and his plans to return to Australia next year with an exhibition tribute to the 100th anniversary from the birth of soprano Maria Callas.

TGH: Niko, your sculptures have travelled the world but this was the first time you exhibited in Australia and for an event very special for Hellenism in the Antipodes. How did that make you feel?

First of all, I would like to wholeheartedly thank Archbishop Makarios of Australia for inviting us to organize this exhibition for the Greek revolution, as well as St. Basil’s organization –and especially George Koromvokis-, who organized every detail for the exhibition at Sydney City Hall! I have held exhibitions in many countries all over the world and at major museums, starting from New York, which is also my artistic base.

The invitation of Australia and the Greek community was very moving for me, because they embraced my exhibition from the first moment and I feel very close to the Greek immigrants, as I myself have been one of them. Having been living in America for many years, I dare say that we, who miss Greece, love it a little bit more! I am glad that art unites peoples, like a universal language of communication that speaks to the soul of everybody.

Australia may be a distant destination but I feel it next to me and intimate, due to the love that the Greeks of the diaspora and the Australians, who became part of my art, convey to me.

TGH: Tell us a bit about your ‘Heroes Made of Metal’ collection. What made you create outfits of heroes from the Greek Revolution with everyday life materials like beer cans?

This is my technique that is also my signature. The creation of sculptures with aluminum as a raw material, and specifically with soft drink cans.

In this particular exhibition, I tried to give flesh and blood to the heroes of the Greek revolution of 1821 and, in fact, to a milestone year of the Greek history, last year, when my work was first presented.

I am the only one in the world, right now, working on this technique. Therefore it is unique. It also has many elements of art in it and this makes my work special.

It could be integrated to surrealistic pop art, without being completely identified with it.

TGH: What are the elements that you try to capture and convey with each of the sculptures?

What I try to convey with my works is their moral greatness, the feeling and the aura they exude. I seek to magnetize the viewers, like a mirror of oneself, as if they see their opposite image through my work!

The sense of energy that still lives and exists through this work. This is my bet: to find these thin cracks, so that the viewer’s glance passes to the other side!

TGH: How long does it take you to bring your creations to life from inception to realisation?

It has taken me a lifetime. I am constantly thinking about the plans in my mind, I sleep and wake up with them. Somebody once asked Picasso to make an artifact. Then they asked him how long it took him to make it, and he answered: half a minute. The amount he asked for was huge.

Then they said to him: “Well, for just half a minute do you want so much money?” And he answered to them: “You do not pay for half a minute but for my whole life so far, so that you have this plan in half a minute!” That’s right, we need a whole life to make a project.

I do not know how much time I have devoted to my works. It looks like a whole century to me. Try to make something with love, even something very simple, like a piece of cake. You will find out that it is not the time that counts but the journey!

TGH: Which one is your favourite exhibit and why?

It all started for me long ago, when I created my first portrait of Queen Elizabeth I. It is a crimson work made of 5,000 cans of coca cola. This work was presented in New York and awarded by the director of the Metropolitan Museum of Art in New York, Harold Koda. This project was also my passport to go ahead and make this international career that followed.

For this reason, I would say that I especially love this work, which is completed today with the portrait of Queen Elizabeth II, a work which completes the collection of Heroes from Metal and is premiered in Sydney, as a thankfulness for the Australian hospitality.

TGH: Apart from a sculptor you are also a musician, an actor and were a cultural correspondent for major newspapers and magazines for many years, based in New York. Why does art matter especially in uncertain periods like the one we are going through now?

My opinion has always been that if you want to achieve something important, you must know and be able to do many things and be a professional. I was born to a poor family in Tripoli, Arcadia, and I did everything with hard work and passion for art.

Of course, it was not easy, but I deeply believe that I did it because I am Greek and I have learned to fight and not to stop at any obstacle. I have met the greatest personalities on the planet, from President Obama to Prince Albert of Monaco. They all loved my art and –through it- Greece as well!

Art has more power than a nuclear bomb. It can draw all the people in its path to unite them and make them see things. Art liberates the human beings, makes them independent, while on the other hand it brings them closer to God. This is its main purpose; not its decorative character.

TGH: What are your future plans? Do we expect to see your creations in the Antipodes again soon?

Yes, I will present a big exhibition in 2023 about Maria Callas on the 100th anniversary of her birth.

Some years ago, I had presented a large collection of sculptures about Maria Callas that had been exhibited in major museums all over the world!

I want this collection to be presented in Sydney, in order to start its world tour from Australia. There will be old and new works. Sculptures and portraits. An anthem to this great Greek opera singer.

The perfect venue for the presentation would be the Sydney Opera House! I believe that it will be held and will attract the interest of the Australian public and the Greek community. With the blessing of Archbishop Makarios, everything will certainly be accomplished!

As a Greek of the diaspora, on the other side of the Pacific, in America, I fully understand how important it is for the people to keep our roots. Greece is unique and is always in our hearts.

In faraway Australia, Greeks have many times proved their love for their country and, as a beacon of Hellenism, they keep the light of Greece on. Through a great struggle, because nothing was given to them, they worked and are still working hard to offer their families all goods, but also their hospitality to whoever asks for it.

I wish that God bless them and give strength to their families. Shall they always be well and help our Greece, whenever it is needed! But I also wish that Greece stand by them in every way!