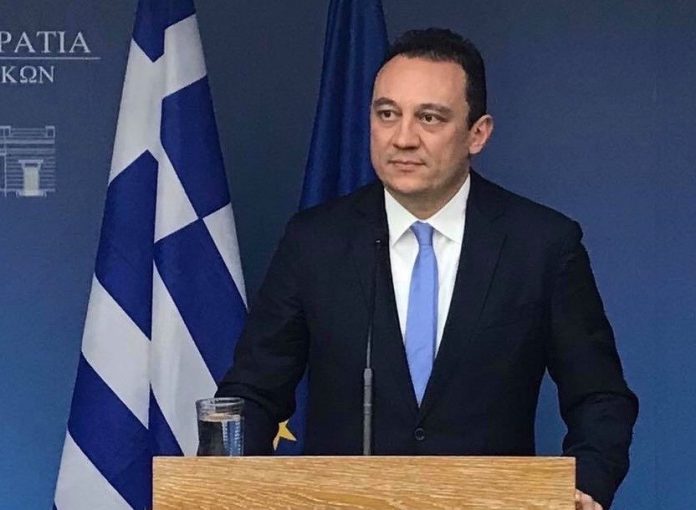 In the first days of his tenure, Greece’s Deputy Foreign Affairs Minister, Kostas Vlasis, who is in charge of the issues of expatriate Hellenism, chose The Greek Herald to relay a statement to Australia’s Greek Community. Back then, he promised to give us a more in-depth interview.

Five months later, in an all inclusive interview, Mr Vlasis talked to us about the exemplary manner Greece managed the health crisis, his recent communication with Greece’s Consul General in Melbourne, Dimitrios Michalopoulos, and the expatriate vote.

“Our thoughts are with the Greek diaspora”

“The Greek government has taken timely and effective measures to manage this unprecedented health crisis. Difficult measures with significant effects on economic activity, at a time when the country’s economic development is a top priority. But there is no room for second thoughts in protecting health and human life. Particularly important was the responsibility of the citizens who, from the first moment, realised the seriousness of the situation and observed responsibly and carefully the prescribed measures,’ Mr Vlasis said.

“Greece has proven internationally that it has the reflexes and means that characterise a strong state, which is able to protect its citizens. Within a short period of time, the state mechanism was fully adapted to the needs of the occasion, through the effective operation of the General Secreteriat for Civil Protection and the National Health System. Especially with regard to the latter, which I have served as a physician and academic, the aim is to further upgrade it, so that, as the Prime Minister himself has pointed out, it will become a point of reference internationally. In addition, let us not overlook the progress made during this period in the digitalisation of public administration, a very important legacy for the future.”

In the days when the “invisible enemy” was largely unknown, there was an anxiety, almost existential, for the repatriation of our compatriots in Greece. The Ministry has played a decisive role in this large-scale operation.

“Our compatriots living abroad are facing a very difficult situation, as they are being tested by the pandemic while being away from home. Many, for example, have been trapped in various countries without work and housing due to the situation. For this reason, the Ministry of Foreign Affairs, in cooperation with the Civil Protection Service, made every effort to return these people to Greece,” Mr Vlasis told The Greek Herald.

“To this day, repatriations of Greeks from all over the world have taken place – and continue to take place. However, there are many others who remain abroad and currently cannot visit Greece, see their own people and enjoy the beauty of our place.

“As I pointed out in the message I sent to all expatriates for the Easter holiday, the thoughts of everyone here in the Motherland are with the Greeks of the Diaspora, especially those who are in bed in pain. We will use every means we have, so that we can be close to them and help them in every possible way.”

As a result of the health crisis, Mr. Vlasis’ planned trip to Australia was postponed. But, the dialogue around Hellenic issues continues.

“Unfortunately, my planned trip to Australia, on the occasion of the national holiday of March 25, coincided with the sharp escalation of the pandemic, forcing me to cancel it. However, at the first opportunity, I promise that the trip will take place,” Mr Vlasis said.

“It is very important at this time to strengthen the bonds of unity within the bodies of the Greek Diaspora. Communities, associations and the Church are a network of contribution and solidarity that must remain active. For this reason, I am in contact with all our expatriate organisations around the world and I am available to discuss any proposal and idea.

“A few days ago, I organised a teleconference with the heads of the fifteen Greek Consular Authorities around the world, including the Consul General in Melbourne, Dimitrios Michalopoulos, to discuss the progress of the pandemic and to explore ways to better interact with the Greek Diaspora during this particularly difficult period.”

The Greek Herald could not help but ask the Minister about the bill which concerns the vote of Hellenes abroad.

“As far as the elections are concerned, at the moment, the Government is focusing on tackling the problems of the daily life of Greek society, has political legitimacy and, as it seems in opinion polls, enjoys the absolute trust of Greek citizens. As for the issue of expatriate voting, the law passed last December in Parliament is a very important institutional section of the Greek political system,” Mr Vlasis detailed.

“A section in the direction of rationality and more democracy, always for the benefit of our homeland. After 40 years of endless discussions, this government has managed to get Greeks living abroad to vote from their place of residence. It was the least we could do to satisfy this just demand.

“It is a fact that some of the Greek Diaspora reacted in a negative way, focusing their criticism on the bill’s condition that you need to reside in Greece for two years before you can vote. But as you know, the intention of Prime Minister Kyriakos Mitsotakis was not to set conditions. He wanted all Greek citizens living abroad to be able to vote. However, the Constitution sets a limit of 200 deputies for the passage of the relevant law, while New Democracy has only 158. Therefore, a compromise had to be reached with the other parties in order to find a mutually acceptable solution. All or nothing was a solution in this case. We want to solve the problems, not perpetuate them.

“In any case, the adoption of the relevant bill, despite any shortcomings, is an important institutional section and at the same time, a justification for our Greek Diaspora, something that many Greeks abroad recognise. After all, this is a national issue that is not addressed in terms of partisanship or voting.

“For this reason, we would like our expatriates to come to the polls en masse in the next elections, supporting the process. In this way, the dynamics of the vote of the expatriates will be demonstrated, so that in the future the issue will be put on a different footing and it will be possible to improve the existing framework. We are in communication and coordination with our Consulates and Embassies abroad, so that, when that time comes, the appropriate conditions will be formed that will facilitate the greatest possible participation of Greeks abroad in the electoral process.”

Reduction of bureaucracy and improved services

In a few days, Mr Vlasis will complete five months in the position of Deputy Foreign Minister, responsible for the issues of Hellenism abroad, and will make an assessment of this short but dense period.

“As a government, we set the goal from the first moment to bring the Greek Diaspora closer to Greece and we are working in this direction every day in order to achieve tangible results. The vote of Greeks abroad was only the beginning of a broader and multi-layered effort. So in this context, one area in which we have focused is on upgrading consular services,” Mr Vlasis said.

“As early as the summer, a joint working group was formed by the Ministries of Foreign Affairs, Interior and Digital Governance, to work out solutions that would reduce bureaucracy and improve the service of Greeks abroad. We have made significant progress on the issue of registering registries with the Consulates, a process that will soon be digital, without the delays and ancillaries of the past.

“In the same direction and in cooperation with the Ministry of Citizen Protection, we are considering the possibility of creating a mobile application unit for the issuance of a passport, which can reach remote areas, thus facilitating our compatriots who live far from a Consular Authority. In addition, we attach great importance to learning the Greek language, preserving the cultural tradition and identity, as well as cultivating an experiential relationship with the Homeland, focusing in particular on the younger generations of expatriates who are the future of Hellenism abroad.

“In collaboration with the Ministry of Education and Greek studies headquarters around the world, we support Greek learning with all available means, making creative use of the opportunities offered by new technologies, as evidenced by the launch of the online platform “Sta Ellinika.” Finally, we aspire to map the Hellenism of the Diaspora. The aim is to obtain an accurate picture of the geographical distribution of the Greek Diaspora, through both quantitative and qualitative data. We are particularly interested in the presence of Greek scientists around the world, as this is an important national asset.

“But I think the biggest challenges are ahead of us. Due to the situation created by the spread of the pandemic and the restrictions that have been imposed, it is difficult for us to contact the expatriates. Much of our relationship with expatriate Greeks is based on human contact and personal communication, on collective activities, which cultivate a sense of community among members of the Greek Diaspora. As it is unclear how things will turn out in the near future, we are all called to live with this new reality, adapting to it and our relations with the Greek Diaspora.

“The General Secretariat of Hellenes Abroad has mobilised in this direction, organising, in collaboration with the Children’s Gallery of Greece and the Hellenic Department of the International Organisation of Books for Youth, a painting competition for young children. In addition, in collaboration with the Greek Film Archive, we offer expatriates the opportunity to watch rare Greek movies online. We will continue to create such initiatives in order to strengthen the bonds of unity of our compatriots with Greece through the message that we are all one near or far.”

To add on to the Minister’s reference to the ‘Sta Ellinika’ platform in his previous answer, we asked him what the purpose of this useful initiative was.

“The ‘Sta ellinika’ platform is the result of a very successful collaboration between the General Secretariat of Hellenes Abroad from the Ministry of Foreign Affairs and the Hellenic Studies Center of the Stavros Niarchos Foundation at Simon Fraser University in Vancouver. It is available free of charge to the children of the Greek Diaspora, at zero cost for the Greek state, thanks to the generous sponsorship of the Stavros Niarchos Foundation,” Mr Vlasis said.

“The aim of the platform is to offer young children a quality, distance learning of the Greek language and mythology, through a fully personalised learning experience. The platform will be fully operational in September, but due to the situation, a first version of it has been put into operation from now on, so that the Greek children who are at home can make creative use of their time during this period.”

We also could not have completed this full-length interview without asking for a message for our community.

“Dear compatriots, you are not alone in these difficult times. Stay united, stand side by side, help those in need. Keep close the memories, the beauty and the light of Greece in your soul and you will draw endless strength. And very soon, with will meet, all together, healthy in the homeland.”