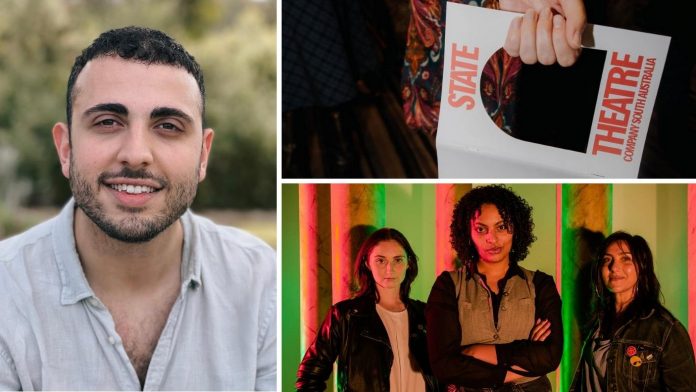 An Australian of Greek Cypriot heritage Anthony Nicola is the Resident Director of South Australia’s State Theatre Company or as his colleagues call him the Resident ‘Enfant Terrible’ due to his outstanding artistic achievements at the young age of 22.

We chat with Anthony as he reminisces about his love for storytelling from a young age, talks about the people who have influenced his career and provides some details on his collaboration with Elena Carapetis for the play ‘Antigone’.

-Anthony give us a brief background of yourself and when did you first realise your penchant for theatre?

When I was a young boy, I loved telling stories. I had a very traditional Greek-Orthodox upbringing and I would often escape into the world of the imagination. I would put on little plays with my cousins at Yiayia’s house for my family, and it all just came naturally to me.

I knew it was what I wanted to do for ages, so straight out of high-school I auditioned for the Flinders Drama Centre, and there I trained as a director for four years before landing my job at the State Theatre Company of South Australia.

What I learned in my time there was that it wasn’t telling stories that I loved at all. What I actually loved was whatever happened between the storyteller and the listener. It is this magical unexplainable communion.

Theatre became my religion. The way that theatre can touch people’s lives and help them understand the world and how to live in it still amazes me. I really believe that every theatrical experience has the potential to create true and lasting social change.

-Are there particular people who have mentored or influenced your career?

So many! But primarily Tom Healey, former Head of Directing at Flinders Drama Centre, who took me under his wing and taught me everything I know. He’s a wonderful human being and a genius theatre maker. We have become great friends.

And similarly, former Resident Artist at State Theatre Company of South Australia (STCSA) Elena Carapetis has also been hugely influential to me. At first, we gravitated towards each other because of our cultural bond, but very quickly we realised that we speak the same language when it comes to theatre making. She inspires me every day.

Also, the current Artistic Director of STCSA Mitchell Butel has greatly influenced my career, as he has believed in me from day one and given me my first main stage show.

-The last two years have been tough for the entertainment and the performing arts sectors. As we transit from crisis to recovery what can we do as a community to protect and grow the country’s theatre culture?

We just need to support each other’s work and see as much theatre as possible.

Life is short, so while we can we need to dive headfirst into every single theatrical experience that we can get our hands on.

-What are the lessons you’ve learned during this pandemic period?

I’ve learned that the connections we have with people are all that matters. When everything else falls away, all we have are the people that we love to lean on.

– The company’s upcoming season presents an eclectic and exciting variety of shows. What would you like patrons to know?

This season is one of my absolute favourites that the company has ever done! As you say, it’s an incredible mix of shows and extremely diverse. There is something in there for everyone. We have true stories, reimagined classics and gripping one-man shows.

-Next year you will be directing Elena Carapetis’ ‘Antigone’. Why should one watch this play and how do you think it will resonate with contemporary audiences?

Antigone is one of the great stories of all time. It explores fundamental questions about the conflict between civil and religious law and common humanity.

The story is simple: Antigone, a young girl, chooses to defy the laws imposed by the king, her uncle Creon. It is this central conflict that Elena Carapetis’ new play explores – a young girl rises up against a powerful man.

Elena uses this classic story to explore the endurance of patriarchy in our world, and how Antigone’s spirit lives on in modern women like Greta Thunberg, Malala Yousafzai and Emma Gonzalez – just to name a few.

But even deeper than his, I think Elena’s play wants to conjure the spirit of Antigone in all of us.

It is a firecracker of a play that wants us all to leave the theatre shouting from the rooftops for the ones we love and for what we believe in. This is a show for all those who have ever felt like an outsider, and how we find the strength to speak our truth.

– What would you say to someone who may be unfamiliar with Antigone to get them to come see the show?

You don’t need to know anything about Antigone to enjoy this show.

We begin in Ancient Greece with the original characters before hurtling 2 thousand years into the future to modern-day Australia and all around the globe. We show different versions of the Antigone story today – different young women speaking truth to power.

Four actors – one man and three women – play dozens of different characters in a collection of scenes that will make your head spin. It’s a wild rollercoaster ride that you won’t want to miss!

*Antigone will be held at the Odean Theatre at 57a Queen Street in Norwood, SA from 27 May – 11 June 2022. To find out more visit https://statetheatrecompany.com.au