‘An exhibition about real people’: Dr Peter Higgs on why the Ancient Greeks still thrill 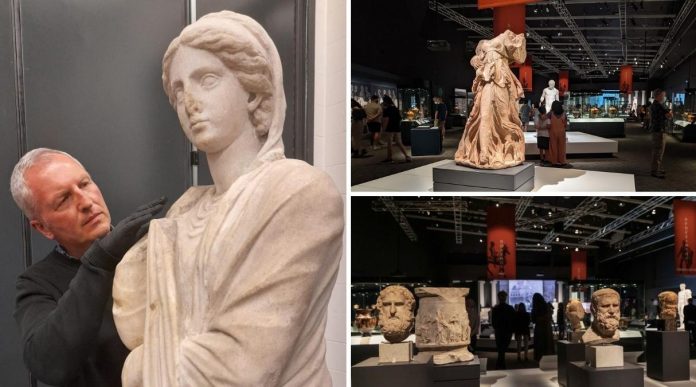 When he was a child, Dr Peter Higgs used to visit the British Museum regularly with his parents and school and was fascinated by the large-scale sculptures, especially those from the Mausoleum at Halikarnassos.

But his connection to the ancient world started years earlier.

“My great uncle had in his back garden a marble full-size copy of the famous Laokoon statue group. I cannot remember it, I was only a toddler, but apparently, I loved it, and had to be stopped numerous times from clambering all over it,” the British Museum’s acting keeper of Greek collections tells The Greek Herald.

“I have only recently seen this statue again, blurred and in the background of a photo of my great aunt Jessie in her garden where the statue was on proud display. I do not know how my great aunt and uncle came to have such a monumental sculptural group or where it is now, but it must have lit a large ember inside me that fuelled my passion for ancient Greek sculpture.”

We sat down with Dr Higgs to learn about the Ancient Greeks exhibition, the importance and limitations of competition in the modern world and his favourite objects.

-Dr Higgs, you chose all but two of the 178 objects featured in the Ancient Greeks exhibition. What were the criteria for the objects that made it to this exhibition?

The exhibition is based around the theme of competition, both in life and in death and is divided into several sections that specifically relate to this theme. The objects were carefully selected to each tell a story relating to the section they are presented in and, in many instances, to ‘speak’ to each other both visually and in terms of narrative. They were also selected because of their aesthetic quality – or because they displayed a certain technical skill.

Many of the selected objects relate to the activities and aspirations of real people- the Greek gods and heroes play a key role – but this exhibition is about real people. Archaeology generally permits us only to understand the upper classes in society –whereas others generally left little trace behind.

But real people are very much are in the exhibition, particularly in the section about Society – they do the work in the fields, produce the food, look after the children and home giving their employers the opportunity to go and train the gymnasium, to write plays, to show off their wealth in public society or go off to war – without the ‘working’ classes the rich would have had little free time to pursue these competitive activities.

The objects in the exhibition can be easily arranged thematically, telling stories and teaching us things that are very relevant and personal, even to the modern-day visitor of all backgrounds and cultures. Many of the objects are works of art that can be enjoyed aesthetically as well as displaying the great technical skills of the ancient Greek craftsmen.

– What made you choose ‘Competition’ as this exhibition’s theme?

We wanted the exhibition to tell a story about real people and their aspirations in life and death. This helps modern day viewers to engage more with these people who lived such a long time ago.

We all follow or practice sport and have heard of the Olympic Games. We watch many modern-day TV programmes about competitions – singing, baking, dress-making, gardening, interior design… the list goes on – but these help us to feel closer to the people of the past and understanding that people in ancient societies were not all that different form us.

The exhibition also demonstrates how the spirit of competition can be creative and starts at an early age. There is competition in obvious activities such as athletics, horse-racing and in the performing arts, but also in more subtle everyday activities such as how the Greeks dressed, the jewellery that they wore – which in the exhibition is made from a variety of different value materials – from cheaper clay to gold with precious stones.

It also demonstrates how important it was for the ancient Greeks from more affluent classes to be remembered after death – to present themselves as model citizens. It also provided us with the opportunity to show competition on a vast scale – with the sculptures from one of the Seven Wonders of the Ancient World, the Mausoleum at Halikarnassos – as this monument demonstrates the competitive aspirations of a megalomaniac ruler!

There is a psychological form of competition with the trails and tribulations of two ‘troubled’ ancient Greek heroes – Herakles and Achilles who battled their inner demons to succeed. Finally, the sad result of competition was the ever-present war that divided Greeks states from Greeks for much of the period concerned. Yet warfare was an extremely popular subject on Greek pottery, gems, sculptures etc.

-What intrigues you about the Ancient Greek art and culture?

The reasons for being so interested in ancient Greek art and culture are numerous and diverse.

There is the visual connection – the large temples, tombs and sculptures that have so inspired sculptors and architects over time. There are the great legends and tales of epic heroes, gods and goddesses which we have known since childhood and the great legacies of the Greek world – wonderfully profound stories turned into plays and then there is the Olympic Games – an early and lasting attempt to promote peace through shared pursuits.

The diverse nature of the material culture of the ancient Greeks and regional differences also interests me greatly and how different areas interpreted stories and artistic styles. It is also extremely important to remember how the Greeks encountered other cultures, sharing ideas and absorbing others.

-What messages do you wish the visitors of this exhibition to take with them?

Firstly, to engage with the Ancient Greeks and feel closer to them through common activities – and to understand the complex nature of ancient Greek society. To remember that the Greeks settled over vast areas of the Mediterranean basin and encountered people from other societies and cultures on their travels to find new areas to settle, people to traced with and resources to discover.

On a more visual level we would hope people have a better understanding of ancient technologies, marble and bronze sculpture techniques, pottery painting and jewellery and gem engraving.

Finally, that competition can be creative but if taken too far can be destructive – we need to learn from the past – unity is better than conflict.

-Which exhibits are your 5 favourite ones and why?

Chalcedony gem with Nike building a battle trophy – This is a superb piece – one of the finest ancient Gem intaglios in existence – that work is extremely fine. Nike is so engrossed with building up the arms and armour of the defeated army into a trophy on the battlefield that her clothes begin to fall around her.  It shows how hard this goddess worked.

Bronze head of a combat sportsman – this piece is a rare example of an ancient bronze – as many were melted down post-antiquity but this is also extremely high quality and a very engaging piece.  The athlete looks battered and bruised and we have a theory that the gashes in the metal might have originally been filled with copper as if they represent bloody wounds or scars.

Terracotta figure of a woman rolling our dough in the Society section – like the goddess Nike on the gem – this is a person totally engaged in what they are doing – it is a snapshot of a working day for a woman who supplies the bakery/household with a staple part of the diet – without her hard work – the athletes would have no energy to train/compete and the writers no brain food to create music or plays. The soldier would go hungry and the people in high society would have nothing to feed their families or guests.

Marble frieze block from the Mausoleum at Halikarnassos – This scene has the Greeks fighting the Amazon women – a common theme in ancient Greek art – and is full of energy – each figure interacts with another – and the scene is equal – a very clever way that the Greeks showed legendary battles  and a device that ultimately raised the reputation of the Greeks as great warriors -– their opponents were strong and not a push over – indicating that the Greeks believed themselves to be super powerful and ultimately won the battle against their formidable legendary and actual enemies.

Bronze plaque showing early life of Achilles – This is an extremely rare example of the story of how Achilles was made invulnerable when his mother, the goddess Thetis, dipped him in the river stick holding his ankle. This is hardly ever shown in ancient Greek art – and there are only a few examples from the Roman period such as this small plaque. Some of the stories we today associate so closely with the Trojan Wars seem to have been very rarely represented in ancient Greek art – two such examples being – the story of Achilles heel and the Trojan horse.