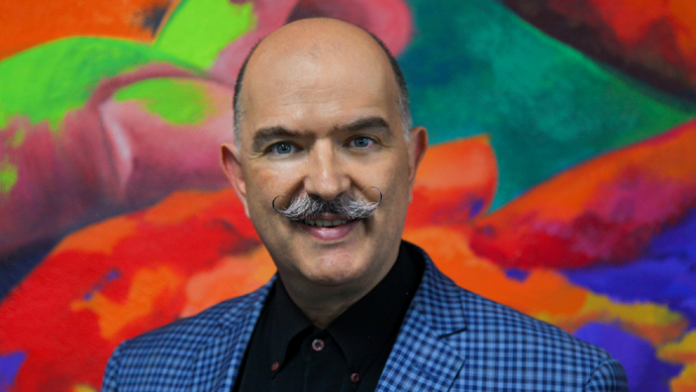 Peter was awarded alongside business leaders from around the world, including Intel CEOs, Pat Gelsinger and Sandra Rivera, and Tyson Foods Chairman, John Tyson. Recognised for their efforts to bridge cultural and religious divides, ten business men and women from UK, US, Iraq, Israel, India, Australia, and Japan were honoured.

The Global Business & Interfaith Peace Awards recognise individuals for their contributions to peaceful and inclusive societies. Peter was awarded the silver medal for his work as a pioneer in using cultural and artistic expression as a means of promoting social cohesion and interfaith understanding.

Peter strongly believes in the importance of embracing religious freedom.

“This Global Business and Interfaith Peace Silver Award recognises what every single one of us can do to bridge the divide and recognise the importance and benefits of faith and religious freedom (including those with no religion) can have on business, the economy and flow on benefits to the community,” he explains.

“By embracing religious diversity it not only strengthens our communities but also promotes tolerance, respect, understanding, equity and equality and ultimately builds cultural and religious harmony.

“Our transformational analytics tool Diversity Atlas is now being used by organisations across the globe to make their settings more equitable, inclusive and representative through a data driven approach.”

Cultural Infusion’s Diversity Atlas platform is a world-first data analytics tool able to provide comprehensive insights into the extent and type of cultural and demographic dimensions of diversity. The survey platform is now being used by think tanks and a range of multinationals to map their global workforce.

Diversity Atlas allows teams and organisations to measure and understand the differences and connections between diverse groups thereby acting as a catalyst for better performance and equity. It features more than 8500 religions and branches, 8000 cultures and more than 8000 speech communities and languages.

The child of Greek migrants growing up in Melbourne’s Western suburbs in the 1960s and 1970s, Peter, born Panagiotis Mousaferiadis, was shaped by the multicultural landscape of the area and time. Before becoming a conductor, he was deeply influenced by and interested in studying religion.

In 2002, he founded the internationally recognised organisation Cultural Infusion, which builds global harmony through intercultural action within education, ICT and the arts.

In 2009, he directed and produced the Parliament of the World’s Religions and today is still a Global Trustee of the United Religions Initiative.

The winner of the United Nations Alliance of Civilizations Intercultural Innovation Award, Peter also produced the winning slogan “Diversified We Grow” for the UN’s “Do One Thing for Diversity” campaign. He is a Salzburg Global Fellow and was admitted to the Asia Peace Innovators Forum.

In 2017, Peter was issued with the Peace Ambassador Award from the Center of Peace Studies in Sri Lanka.

Held in tandem with the opening ceremony of the Paralympic Games, The Global Business & Interfaith Peace Awards were held in Rio de Janeiro in 2016 and Seoul in 2018 in collaboration with the UN Global Compact, and Tokyo in 2021. The 2021 jury comprises high-level experts, including from the European Union; the NGO religious freedom community; and the business and peace community.

Nominees must have launched or spearheaded policies, programmes or initiatives that contributed to increasing interfaith understanding and peace in the workplace, marketplace and/or local communities.

The Global Business & Interfaith Peace Awards are presented biennially by the Religious Freedom & Business Foundation, a US-based nonprofit. The foundation helps educate the global business community about how religious freedom is good for business and how they can promote respect for freedom of religion or belief.