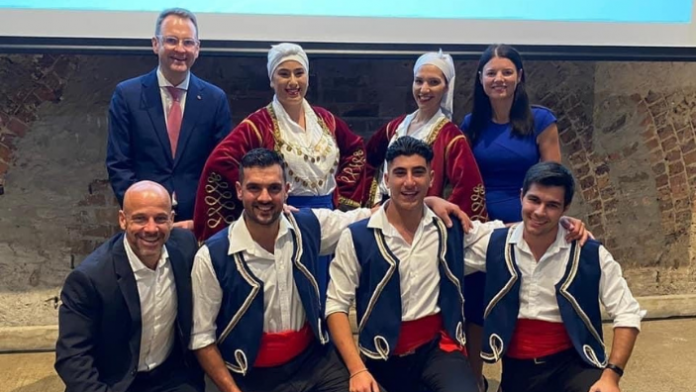 Federal Member for Reid, Fiona Martin MP, has always been incredibly proud of her Greek heritage and strives to find out more about it every day.

That’s why for Greek Independence Day this year, we asked Dr Martin to share with The Greek Herald her thoughts on the national day and on her Greek ethnicity more broadly.

March 25 is a day where we thank those that came before us. It’s about honouring our ancestors for the great sacrifices made to gain independence for Greece.

2. What do you remember as a child growing up?

I never had the chance to meet my late pappou (Mark Barbouttis). He passed away before I was born in a tragic car accident. He emigrated to Australia in 1926 and I’ve heard from family members who remember him that he was kind and smart. He was also described as a leader, a family man with a community spirit. He was a small business owner (he owned a milk bar), he became an Alderman and trained in the Australian Air Force near Newcastle.

My late yiayia (Mersina) was widowed for half of her life. Yiayia came from a large family and her childhood was on Kastellorizo, Greece. The only daughter of the Harbour Master.

She experienced war on Kastellorizo and consequently fled to Australia. She married my pappou in Australia and had four children but tragically lost her husband in a car accident and at the same time miscarried her fifth child. She suffered greatly. Compounding trauma lead to PTSD, which was never really treated and later she developed psychosis. Observing my yiayia suffer when I was a child inspired me to learn about mental illness and go on to become a psychologist.

My Greek identity was strongly influenced by my yiayia’s brother, my great uncle Gus (Manettas). Uncle Gus helped raise my dad and his sisters. He lived very close by and was very protective of his family and proud of his Greek heritage.

When I was 12 years old and in Year 6, I travelled to Greece with my Uncle Gus and Auntie Norma and my cousin Mersina. I think it was that holiday where I learned first-hand about Greece’s history and Kastellorizo, and I developed a deeper understanding and affection for my Greek heritage.

3. Why do we need to keep honouring and celebrating national days?

Celebrating national days like Greek Independence Day helps us understand our shared history and the importance of embracing culture and multiculturalism.