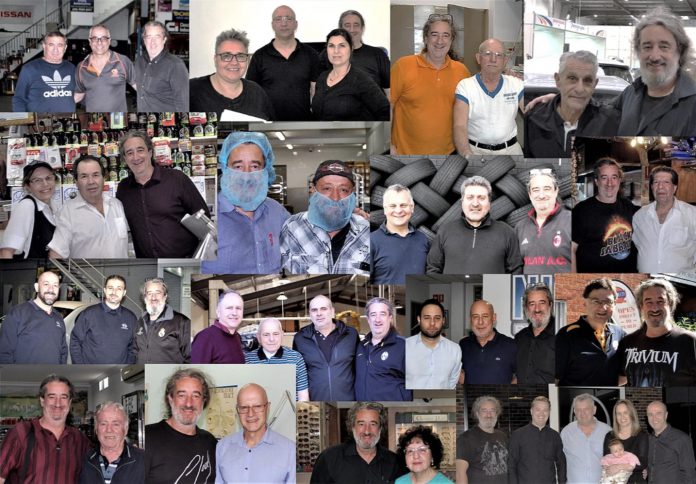 With the first part of his latest book, ‘Little Athens (Volume One): Marrickville’ being published this year, Vasilios Vasilas has teamed with The Greek Herald to introduce ‘Vasili’s Taxidi: Marrickville’s Memory Lane’ . Vasilios will be taking The Greek Herald’s readers on a journey through Marrickville, making stopovers at the Greek stores and workshops that made Sydney’s Greek presence what it is today.

Vasilis Vasilas shared with us his motivations, his pride in his Greek heritage, and the future of Greek businesses in Sydney.

You have published several collections of personal narratives, over different themes; what inspires you to work on different projects?

Over the years, I have made a conscious decision to look for opportunities to undertake very different projects, whether they are subject matters that have not been focused on previously, or a personal attempt to widen my collective work. In doing so, I have tried to avoid being categorised as the person writing about one specific subject matter, as an actor avoids being typecast.

For instance, many books were published on Australian football and football personalities’ autobiographies but I wanted to compile a book, The Giant Who Never Awoke, on a specific club- Pan Hellenic SC. Moreover, a collection of war veterans (who have migrated to Australia) and their stories had never been done in Australia. Branching out beyond the Greek community and compiling oral history books on the Estonians, (Jewish) Hungarian and Ukrainian was a determined effort to see whether I could replicate my work in other communities….With my personal narratives on Greek shops and businesses, I feel so many of these stories were being lost, for whatever reason. Even the Marrickville book looks at the diversity of Greek shops and businesses from another perspective- as they are all located in one suburb. So, I am continuously on the lookout for new ideas and opportunities.

What inspired you to go ahead with this project on Marrickville’s shops and businesses?

This project is actually an extension of my latest book, ‘Beyond the Shop Windows and Counters’, which focused on a range of Greek businesses such as barbers and hairdressers, cobblers, florists and others.

The first Marrickville narratives I collected were done the same period (2015-16); as I gathered more narratives, I realised Marrickville deserved its own volume. Marrickville is such a unique case because its relatively large Greek population (1960-90) spurred Greek enterprise in the area- Marrickville is a microcosm of the Greek contribution to Sydney business and the marketplace.

On a personal level, my paternal grandparents lived in Marrickville; not only did we visit them regularly but we visited Marrickville for our shopping practically every week. When my family was between houses, we lived at grandparents’ house too. Our family’s parish has always been Agios Nikolaos Church. Up until the Antoniou family opened up the delicatessen in Earlwood, where I grew up, we visited nearby Marrickville to buy our Greek cheese and coffee etc. As Marrickville provided many job opportunities, my father worked for Australian Confectionary (Edinburgh Rd) in the 1980s; he then worked for Cleana Services (Chandler St) in the 1990s. I was part of the first crew when Marrickville McDonalds opened in 1984 and I spent a lot of time there. So I feel as close connection to Marrickville, even though I would regard myself as a ‘tourist’, and this is what inspired to undertake this project.

Is there a common theme you have noticed when comparing all these old Greek businesses to the way they are now?

The longevity and subsequent success of any business is based on so many factors. In Marrickville’s case, so many Greek-owned shops and businesses shut over the years; the ones who have remained there for forty or fifty years highlight several things, such as their enormous work ethic, high-quality products and services, and their acceptance within a broader market – they no longer cater for only Greek customers.

For the Greek-owned eateries, the Greek cuisine is now an accepted part of the Australian cuisine and Australians of all ethnic backgrounds crave for Greek foods…For the Greek-run ‘trade’ factories and workshops, they service a broad clientele too.

In the 1960s, Marrickville’s Greek migrants went to Greek shops and businesses because they could communicate with the owner and their needs and sensitivities were understood; nowadays, Marrickville is a very different marketplace and the current businesses have adapted to changes, whether demographical or technological, to survive. They have transformed themselves to cater the broader market whether it was renovating premises and even changing the business name from a Greek one to something more universal.

It should be noted so many Greek owned businesses successfully grew beyond Marrickville; they moved to western and south western Sydney to larger premises too and I look at these reasons why they relocated.

Do you think the ‘Greek family business’ model is becoming redundant?

One of the reasons for the closure of so many Greek-run shops and businesses over the years was there was no succession plan- for the business to pass onto the next generation.

For many of the current shops and businesses, there are cases that will eventually close. But many have had a succession plan in place for many years. M and J Chickens, Valitel, Hellenic Patisserie and Gelato Bar, Danas Deli Café, Corinthian Rotisserie, Rasko Linen Services, Prestige Smash Repairs, Cleana Services, Souvlaki Boys, Nice Products, Franks Auto and Tyre Service, Golden Top Bakery, Universal Finance and Zois Embroidery are just a number of businesses where the migrant parents work alongside with their children who will eventually take over the business (if they have not already).

Even newer businesses, such as Pagoto Gelato and Waffle Bar and Georgia’s Kitchen, have parents and their children working together. In a case such as Danias Timber, it is a third- generation business. If a business is so successful, there is pragmatism for it to be passed down to the next generation. In labour- intensive shops and businesses, however, there will be a high probability the children may not wish to continue…

What is your favourite thing about being Greek?

Over the years, I have interviewed, Lesvian migrants, Greek footballers, Greek war veterans and Greek shop owners and this has truly developed my love for our community- I love immersing myself within it.

As an Australian of Greek parents, that dual identity is very special. It may have been difficult growing up in the 1970s when, as children, we just wanted to fit in. I accepted being called Bill, and even William, but maturity has given me a strong sense of pride about my Greek heritage. This Greekness distinguishes me from other Australians – whether it is the spirituality, language, history, cuisine, music, arts or whatever, it sets me apart for others and it is so special to be able to tap into my Greek heritage.

So, my favourite thing about being Greek is just that… my identity of being Greek.

What is the most memorable thing you’ve learnt from a grandparent/older Greek figure?

My paternal grandfather featured prominently in my formative childhood years; he was definitely larger than life. He had a strong work ethic but enjoyed a great time – he loved his social life. He was always a giving person; I distinctly remember him always offering strangers, at a bus stop or train station, a cigarette.

He was a survivor. He survived without knowing his father (as a passenger, his father’s ship hit a mine and he drowned (1917); he, and his family, survived the burning of Smyrne in 1922; he survived the Greek Italian War in 1940-41; he survived migrating to the other side of world.

So many adversities, and he overcame them all to live his life the way he wanted. I have said before that his generation was the Age of Heroes – the heroism of an ordinary person.

‘Vasili’s Taxidi: Marrickville’s Memory Lane’ will be posted on The Greek Herald every Friday. Stay tuned for the first post on Dana’s Deli.