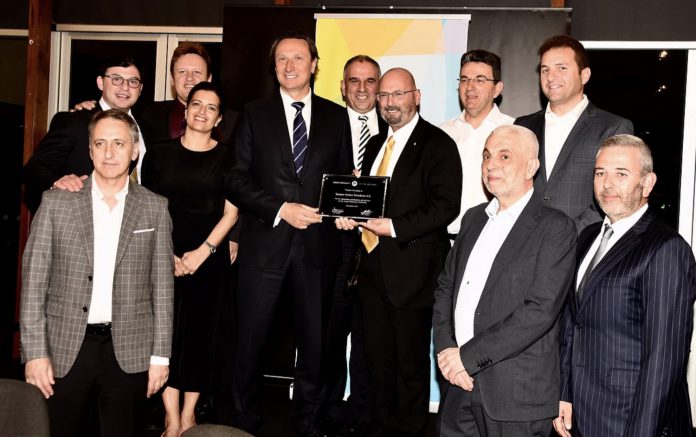 The Greek Community of Melbourne (GCM) hosted a fundraising tribute dinner for Senator Arthur Sinodinos AO, Monday the 28th of October – ‘Oxi Day’. The event was hosted at the Kooyong Lawn Tennis Club, ahead of the Senator’s move to the US to embark on his role as Australia’s next ambassador to the US.

Host, George Donikian curated a series of questions for the Senator that gave guests an insight into his young life, political highlights and experiences.

The GCM President Bill Papastergiadis introduced the evening by noting the complexity of the Senator’s life:

“…with many people like Arthur Sinodinos, his life resembles an iceberg, the tip is his public profile- the things you read about on Wikipedia but beneath the water is where the real depth is and it’s the hours and hours devoted to public life, committees and community groups that’s where we change people’s lives”.

The Senator then took questions from the invited guests for over 45 minutes. Topics ranged from Australian politics, to his role as Chief of Staff for then Prime Minister Howard and the Australian/US relationship.

When asked to comment on his involvement of the Greek Community of Melbourne the Senator was particularly praise-worthy of the GCM’s current approach to its administration:

“My involvement with the Greek community here in Melbourne goes back a fair way. I had a lot to do with some of the former Presidents and Committees in the days when, it’s true to say that the Greek Community both here in Melbourne and in Australia was sort of very politically charged and were still very rooted in Greek politics…

So as the leadership here changed and they became new leadership, younger leadership… you seemed to be very plugged into the broader Australian Community that was important and very focused on how do we build our Greek community within the broader community. I saw that as a great change and one which made it easier for me as a person of Greek-Australian background to put the case as to why in government we should be helping communities like this in what they were doing.

Because if you go to the PM and say look these characters are building a Cultural Centre in the middle of Melbourne… they’re building something which will be a cultural icon not just for the Greek community but for the people of Melbourne… well, that’s the sort of thing that grabs the imagination of politicians. So in going out there and embracing the community and contributing to the Greek community, I think the Greek Community of Melbourne… have excited the imagination of politicians and got them feeling we’re dealing with people from Melbourne more… for me that’s been an important change and one which hopefully you’ve been able to capitalise on.”

Senator Sinodinos was effusive in his praise of the GCM and of the Community’s initiative in building the Cultural Centre and of the significance and value of the Antipodes Festival on a national landscape.

“…and every year now, any politician who doesn’t put on their calendars to come to the Antipodes Festival has got rocks in their head, because… this is the Centre of Hellenism. There’s no two ways about it. And when a politician of any type is on that stage looking down at Lonsdale St and seeing all those people, it makes a tremendous impression.”

“You’ve got to remember that he grew up in1940’s and 1950’s Australia, and so for him and for his generation it was quite an adjustment as the society changed and he was always a great believer in the British institutions that we have inherited… and that’s fine, but I think in his own mind he couldn’t quite see, well how do you improve on it?

The way we improved on it without being very conscious about it, was we employed every…succeeding wave, first the Italians and Greeks and other European’s and then the Vietnamese followed by the Middle East and Africans and so on…

I think in the end he was surprised by the extent in which it went so smoothly, and I think in retrospect – and he said this in ’95 when he came out to leadership – he regretted some of the things he said earlier because he realised it could actually work. But it could work because of the values that brought us together.”

Senator Sinodinos will depart for Washington in the new year to commence his role as the next Australian Ambassador to the United States of America, becoming the first Australian of Hellenic background to hold such an auspicious role.