‘A phenomenon’: Pavlos Demertzis-Bouboulis on his ancestor naval commander Bouboulina 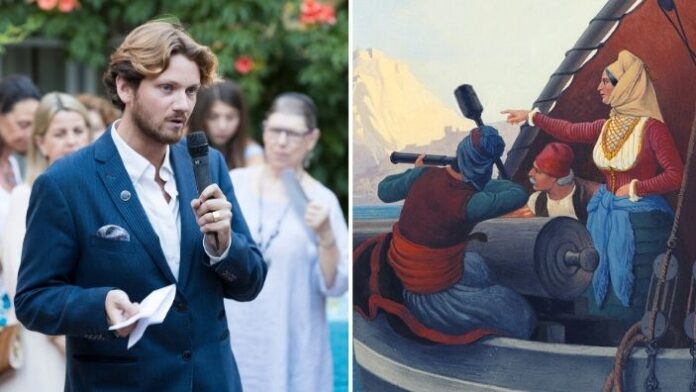 Laskarina Bouboulina was a naval commander and heroine of the Greek War of Independence.

But she was not only that.

Bouboulina or ‘Capetanissa’ was also a woman twice widowed by the age of 40, a mother of 10, an enterpreneur and until recently, the first and only woman in world naval history to hold the title of Admiral.

Two centuries after Bouboulina raised the Greek flag of the Revolution to resist the Ottoman oppression, Pavlos Demertzis-Bouboulis, a sixth-generation descendant is trying to keep her legacy alive and explains why her story is more relevant than ever.

Q: What is it like to be a descendant of a Greek female naval commander and a heroine of the 1821 Greek War of Independence?

A: On my father’s side, I am a 6th generation descendant of Greek revolutionary heroine Laskarina Bouboulina from her youngest son, Nikolaos Dimitriou Bouboulis (1808/10 – 1884), who later became a commander in the – then – Royal Hellenic Navy.

My two younger brothers and I were raised on the island of Spetses in Bouboulina’s house – part of which remains our family home to this day – surrounded by this incredible woman’s story. Since we were also carrying the family name, you can understand that it wasn’t something anyone could easily ignore and it wasn’t always easy for us.

I admit that, as children, our feelings about our heritage were mixed, something I consider completely natural at that age. Of course, as we got older and better understood the important role our great-grandmother played in Greece’s path to independence and the historic legacy of her actions, we grew to both respect, admire and love our family’s history.

I am immensely proud of my heritage, even though it comes with a great weight on one’s shoulders – and I do not mean that in a negative sense. It is a responsibility, a duty if you will, to safeguard her legacy and try to live up to Bouboulina’s actions and ideals, in a way befitting to today’s modern world.

Q: Who was Bouboulina from your perspective? Can you give us a fact regarding something about her that most people don’t know?

A: Laskarina Bouboulina, the ‘Capetanissa‘. Naval commander and heroine of the 1821 Greek Revolution against the Ottoman Empire. This is the punchline of her story, that almost every Greek around the world knows. However, if you look closely, she is so much more than that.

She was a woman, twice widowed by the age of 40. A mother of 10 children in total – 7 of her own, plus 3 more from her second husband’s first marriage.

An accomplished businesswoman, an entrepreneur who managed her own wealth and shipping enterprises. A born leader, who commanded her own fleet and her own private army during the revolution and, until recently, was the first and only woman in world naval history to hold the title of Admiral.

All of this in early 19th century Greece, a land dominated by men and patriarchal tradition. To me she was a phenomenon in her own right, a pioneer of her time, whose story inspired writers, poets and artists throughout Europe.

If you move past the Greek Revolution and also consider modern day civil and equal rights movements and the struggle for the emancipation of women throughout the world, I believe her story could not be more relevant today.

A: The museum was founded in 1991 by my late father, Philip, and my mother Linda, in a final attempt to save the 350-year-old mansion from certain collapse.

A designated heritage site since 1925 via Presidential Decree, unfortunately state assistance over the years was minimal and the cost of maintenance and restoration was impossible for the family to keep up with.

It is a private non-profit organisation, and its main objectives, apart from the restoration and maintenance of the building and grounds, are its function as a cultural centre and national monument, ensuring that this legendary woman’s story is known to the world.

To date, more than €1.500.000 – mainly generated from the proceeds of visitors’ tickets but also state and European funding – have been spent on building renovation and artefact restoration work, and the Museum has welcomed more than 1.200.000 visitors from Greece and abroad.

We are considered the No1 attraction on the island and we have been named amongst the 10 best small museums in the country by the Guardian. In 2016, the Museum and my father were honoured with an award by the Academy of Athens, Greece’s highest cultural institution, in the category of ‘Ethical and Political Sciences’.

I take pride in knowing that the story of this legendary woman has spread around the world, in great part thanks to our Museum and the work we have done over the past 30 years.

As I mentioned earlier, this is my family’s heritage and something you cannot easily run away from. It is as much a part of me as I am a part of it and I think that applies to all of my family. The continued survival of the Laskarina Bouboulina Museum is the least we can do in her memory. It is our obligation to those who came before us and those who will come after us.

Q: Is there support and/or interest from the diaspora and are there any plans for collaboration with Hellenic Museums overseas?

A: Interest and knowledge of the Bouboulina Museum has thankfully increased in the past decade, especially since the introduction of social media but also from documentaries, television interviews and newspaper articles in Greece and abroad.

Even though most of our visitors are Greeks, we have translated Bouboulina’s story into 25 languages and we work with many embassies in Athens organising tours and events. We have collaborated with a number of small cultural institutions in Greece, as well as with the Maritime Foundation in London and the Hamburg Maritime Museum in 2016.

We have always wanted to expand and diversify the museum, to collaborate with cultural institutions in and out of Greece and to bring the Bouboulina Museum firmly into the 21st century. However, the country’s unfavourable financial conditions over the past years’ economic crisis, coupled with Spetses’ short tourist season, have been obstacles in fulfilling many of these plans with our own financial means.

Furthermore, the 2020 restrictions imposed due to the pandemic, the effects of which are expected to last well into the future, not only rendered most of our plans unachievable, but they also brought with them the very real threat of closure. Thankfully we were able to weather the storm so far and stay afloat. Unfortunately, a great number of other institutions around the world were not so lucky.

Q: Are there any special events coming-up for the 200 years from the Greek War of Independence?

A: The 200-year anniversary of the Greek War of Independence has been anticipated as a year of great celebration. It is not only a landmark for Greece and Spetses, but additionally a year of special importance to us as it also marks 250 years since the birth of Laskarina Bouboulina, and 30 years since the founding of the Museum.

As we are a small, family-run museum, we do not have the capability or the resources of some of the larger institutions in Greece, but we are confident we can still play an important part in the celebrations. We have a small number of plans in the works for 2021, such as art and history exhibitions, lectures and music events.

However, as everyone surely understands, it is very difficult – I would say almost impossible – in the current climate, to plan and organise any sort of event that would entail large numbers of people. No one really knows how museums and cultural institutions will be able to operate this season, so nothing is set in stone regarding the celebrations.

Q: How can someone from overseas support Bouboulina’s Museum?

A: I am a firm believer that out of any crisis comes opportunity. We are currently in the process of creating a new website for the museum and also establishing an association of friends. Our website will of course have an e-shop, so people will be able to purchase items from our gift shop which we are also enriching with new products. Once the association is up and running, it will form the link between the museum and the general public in Greece and abroad.

By becoming a member, you will help with providing the museum with financial, material and moral support and help increase the public’s perception of the museum itself and its cultural activities. The continuity and growth of the museum beyond the borders of Spetses and Greece is only possible through the commitment of friends and sponsors.

We hope to have the website up very soon and to establish the association before the summer season begins, but until then, anyone wishing to support the museum and the work we do may contact us at bouboulinamuseum@gmail.com. Especially in these turbulent times we are all living in, everyone’s continued support will allow us to faithfully continue our obligation to those whose sacrifices earned us our national freedom.