‘Everything I do, I find a little success in’: Violinist Dimitri Calligeros reflects on his career 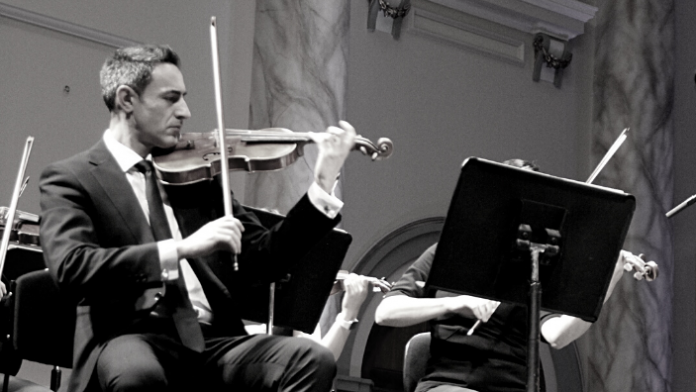 As Dimitris Basis walks towards the front of the stage with conductor George Ellis to begin the show on the 200th Anniversary of the Greek War of Independence, principal violinist Dimitri Calligeros holds on his musical instrument tight and gives the concert pitch along with a bright smile.

Everything is ready to go. The vibrant and warm on-stage energy spreads like a peplum over the audience at Adelaide’s Town Hall.

Ellis bows in front of the attendees before he goes on to silently introduce to the crowd his right-hand man, Dimitri Calligeros.

The two men, met working for the Sydney Opera House Orchestra nearly 20 years ago and they developed a strong musical rapport as well as a very close friendship as George Ellis reveals to The Greek Herald.

“He is a superb musician. As my concertmaster, he not only plays by example on stage but also helps me behind the scenes by collating and sorting the music. He is my right-hand man and my go-to person for all our Greek music orchestral performances. I respect him highly,” says Ellis.

So much respect they have for each other, that George trusted Dimitri to conduct the concert held in Brisbane last week. Only a few hours before this major undertaking, a first of this scale in his career, the violinist spoke to The Greek Herald about his career in music, his future plans and shared his advice for aspiring musicians.

Who is the virtuoso violinist?

“What I remember is that I was about three years old when I started telling my parents that I wanted to play the violin,” he says.

But nothing happened until some years later when Dimitri was in primary school.

“One day we did some music trials and I got to try out the violin by chance. I was very enthusiastic and my teacher, who ended up being my mentor for many years, called my parents to suggest that I should play the violin and this is how it all started,” Dimitri says.

“I finally got to play and that was that. I have been playing for more than 30 years.”

As passionate he is about his music, he is proud of his Kytherian background.

“I’m a Tsirigoti (a Kytherian),” he tells me in fluent Greek and explains how his yiayia (grandma) who migrated to Australia with her husband, was the first person to teach him the language.

“She would sit me down and talk to me all the time,” he says, explaining how his upbringing has influenced his career.

Asking him if he can sense the impulsiveness and the emotion of a Greek audience while on stage, he nods and smiles.

“You can feel the energy. For us – me and colleagues – who are classically trained, it’s so refreshing to come to a stage and a concert like the one we currently perform for the 200 Years from the Greek Revolution, around Australia. There is so much involvement and this brings a great feeling all round.”

‘Everything I do, I find a little success in’

What does the musician consider the biggest success of his career so far?

“This is a hard question,” he says, “it’s like when I’m being asked what’s my favourite piece to play.”

“Everything I do, I find a little success in. My biggest success is that I do what I love doing full time and at the same time I have the opportunity to work together with great people like George Ellis.”

I ask him to give his advice to people who want to follow in his footsteps.

“Believe in yourselves, work hard because nothing can be achieved without hard work and do what you love doing with passion. Follow your heart,” says the violinist who is also a music teacher.

Speaking about his future plans, Dimitri looks forward to releasing a solo violin recording of Vivaldi’s Four Seasons, that will be available soon.