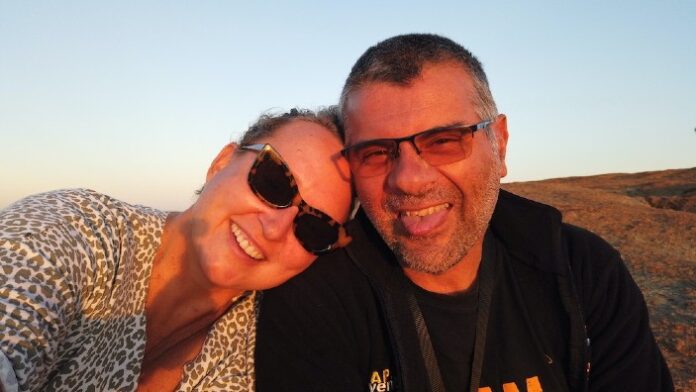 The figure of Yiannis Giannopoulos is as if it has sprung from the pages of Jack Kerouac’s emblematic book, “On the Road.” For the last 7 years or so, he has been driving around the world with his Australian wife Rochelle. The two of them, along with their permanent companion, their car, have travelled to Asia, Latin America, Europe and since February 16, 2020, have been in Australia.

These days, they would have been planning their return by road, via Asia, to Greece. But the pandemic had other plans. For about 11 months, they’ve been travelling around Australia on an archetypal journey of discovery.

“Our first trip was in 2014. We then wanted to travel from Greece to Australia. We started by road, but somewhere in the middle of India we realised that we would not have enough money, so we returned via China and Russia back to Greece,” Yiannis tells The Greek Herald.

“We worked for about a year, raised money and left for 2 years in Latin America. We started planning the trip to Australia in October 2019. We traveled to Morocco and Mauritania, then we returned to Europe. We visited Portugal, Spain, France and ended up in England, where it was possible to put the car on a ship for Australia.”

The change of plans and a trip to Western Australia:

Both Yiannis and his wife work in the hospitality industry. They sign contracts with hotels, which lead them to “safe waters” as soon as they start their travels. In 2020, the great adventure of Australia began.

“Our main plan was to travel around Australia for a year and then send the car to Asia and return by road to Greece. On February 16, we landed in Perth. By the end of February, the situation with the pandemic began to worsen,” Yiannis explains.

“We went to Denmark (a small town in the southern part of Western Australia, near Albany), where Rochelle’s parents’ house is located and where the borders of the country and the state are closed.   For 82 days we were in lockdown. There were also complications with the car, which came to us in May, and so all our plans were overturned.

“We decided to travel to the northern part of Western Australia. We reached the borders of the Northern Territory. Once there, we had the dilemma that if we passed we could not return due to the restrictive measures that existed at that time. So we decided not to risk it and continued to tour Western Australia.”

The pandemic clouds deprived them of the pleasure that accompanies a journey.

“We had constant stress. What will happen to the visa? What will happen to the car? In terms of formalities, it was the most difficult trip I have made in my life, mainly due to the fact that I decided to bring my own car, in addition to the pandemic. That is, we were just now starting to relax from this whole situation,” Yiannis confesses.

The coronavirus pandemic in Australia:

As an observer in an unprecedented situation, Yiannis Giannopoulos describes how he experienced the pandemic in Australia.

“When we got off at Denmark in Perth I wondered, ‘Well, they don’t have a pandemic here.’ They were all very relaxed. Of course they discussed the issue, but we did not see any masks or any panic. An important role in this was played by the fact that Western Australia closed its borders very early,” Yiannis says.

“We understood the difference in South Australia. People no longer shake hands, and when you talk to someone they keep their distance. You see people more closed. In fact, when I say that I am a foreigner, there is a greater caution.

“The difference with Europe is big because it was hit harder than Australia. Australia is also remote, closing its borders early and having better procedures for dealing with emergencies. Thus, they did not feel the pandemic on their skin. With the exception of Victoria of course Victoria.

“For travelers, however, many things have changed. We travel to get to know places and people we can no longer talk to. They are more cautious. It has cost me that I did not know the culture of the Aborigines.”

The spanakopita in Adelaide and their future plans:

These days, when Yiannis spoke to The Greek Herald, he is in Adelaide.

“From now on I will start getting to know Greeks. From Adelaide to Melbourne. There were few Greeks in Perth. You had to search to find. Let’s say, now that I am in Adelaide, I managed to eat spinach pie for the first time in 1.5 years. I went to the Central Market and got a twisted spinach pie with feta cheese,” he says about the taste of Greece that he experienced again.

He will travel to Melbourne, Tasmania, New South Wales, Queensland and the Northern Territory. Pandemic permitting, he will leave Australia in February 2022. By road, via South Korea, Japan, Russia and Mongolia, he will return to Greece at the end of 2022. He will keep vivid memories of Australia.

“Pilbara and Kimberly, the two northernmost parts of Western Australia, are incredible. The impressive thing is the WA outback,” Yiannis says.

A modern explorer who, together with his wife, feeds on the pleasure that the discovery of a journey offers. You can watch the adventures of John and Rochelle here at or contact them at info@overlanddiaries.com.