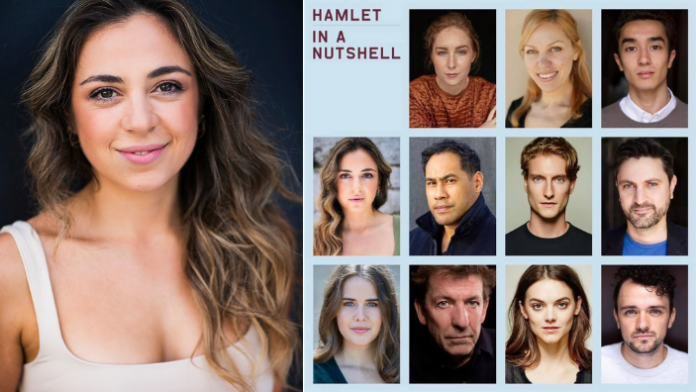 Eleni Cassimatis is a theatre, film, television, and voice actress who loves each medium equally.

“I fall in love with whatever I’m doing at the time,” Cassimatis tells the Greek Herald.

“I have a very big spot for Shakespeare, I love performing Shakespeare.”

Cassimatis has performed in several Shakespeare plays, something that involves “delightful, nerdy digging” and text analysis.

“The stories are pretty epic. Once you let the words do the talking, it just becomes musical. There’s something contagious about it,” she says.

“Shakespeare was the first one to put pen to paper and capture what it means to be human.”

Cassimatis first fell in love with acting in kindergarten as the daughter of a cafe owner in Orange.

“I always wanted to be an actor,” she says.

“It was always what I was planning on doing but being over in London and seeing shows (during my gap year in 2013), I was like, ‘I need to get back to Sydney.’”

“…it gave me the jolt into action to just go, ‘If I want this bad enough, I just need to work my butt off.’”

She hit the ground running by moving to Sydney in 2014 and taking up every acting course she could enter.

Two weeks ago, she was cast in her first mainstage theatre production as Player Queen, Osric, and Second Gravedigger in Bell Shakespeare’s production of Hamlet.

Hamlet has been on hold since the beginning of 2020 due to COVID-19 restrictions.

“They had about a week of shows and then the pandemic hit and the show got cancelled,” she says.”

“I got to watch the show two years ago before it got shut down.”

“Some of the cast members have already had an experience doing this show on stage and then some of us are new that have stepped into these roles.”

She says it presented a unique opportunity for the cast to be able to grow with their characters.

“Every time you have a life experience, that changes what you’re going to bring to a character, and going through two years of lockdown will only inform what everyone brings to these characters,” she says.

“Hamlet is a play about longing, grief, losing ones you love and being separated versus being together.”

“All of that is going to be really interesting to explore.”

Cassimatis and her cast-mates will also play in Bell Shakespeare’s In A Nutshell, which debuts during her time in Hamlet.

“We’ll be working on one show at night and working on another show during the day,” she says.

“It will be an interesting process and not something I’ve done before but nothing we can’t manage.”

She says playing three different characters in her debut at the Sydney Opera House will be “a huge” but “super exciting” challenge.

“It will be my first time (performing at the Opera House) and it is an absolute dream come true,” she says.

She says the biggest crowd she’s performed for was an outdoor audience of about 400 school students in Hong Kong.

“I just remember a sea of young people in front of us and then everyone piled out from their classrooms up the top to watch over the balcony too,” she says.

She describes the nerves she gets before a show as a muscle to be trained.

“It’s healthy, in a way. It’s your body’s way of preparing itself to go do the thing it needs to do,” she says.

She also has two director’s credits under her belt, including a short film in 2015 she also starred in.

She sees lots more work in theatre, film, and television in her future.

“I would love to, one day, do some work in the (United) States but we’ve got so much on offer (here in Australia) at the moment,” she says.

The silver lining to an unpredictable two years of a pandemic, she says.