Top Greek Athletes of the Decade 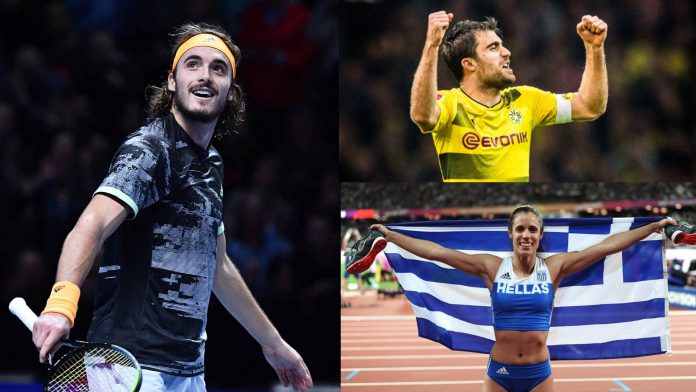 Despite only entering professional tennis in 2016, it’s impossible not to cement Tsitsipas as one of the greatest Greek athletes of the last decade. Tsitsipas was ranked world No. 1 as a junior, playing on the ITF junior circuit in 2013 at the age of 14.

At only 18 years old, he won the runner up trophy at the 2017 Brest Challenger, also participating in the French Open that same year. At the age of 19, he became the first Greek player to be ranked in the top 100 of the ATP rankings.

Currently ranked at world No. 6, the 21 year old has collected over ten million dollars in prize money and is the highest-ranked Greek player in history. His drastic climb to the top of the tennis charts in only 2 years has made himself a title contender for the next decade of tennis competitions.

There are many Greek football stars that could have been on this list, however Sokratis makes the list due to his consistently strong performance throughout the whole decade. Sokratis had a successful five year spell from 2013 to 2018 at Borussia Dortmund, being awarded the role of captain in his final few years. The past two years, he has been playing as leading centre back for former Premier League champions Arsenal.

Along with his strong domestic performance, the Kalamata born defender has played ninety games for the Greece national team. His strong performance in the 2014 World Cup made him recognised as one of the greatest Greek players during the tournament that year.

Anna Korakaki represented Greece in shooting in the 2016 Summer Olympics and since then has dominated almost every shooting competition she has participated in.

At the age of 20, she earned a gold medal for the 25m and a bronze for the 10m air pistol in the 2016 Olympics. Since then, she has won numerous first place medals, including at the 2018 shooting world championships and the 2019 European Games.

Competing since 2009, she is coached by her father and retired shooter Tassos Korakakis. At only 23 years old, she will ultimately secure a place as one of Greece’s greatest competitive shooters.

Only 25 years old, the “Greek Freak” has cemented himself as one of the greatest Greek basketball players to grace the game. Born in Greece to Nigerian parents, Antetokounmpo has spent his entire professional career at the Milwaukee Bucks, making his debut as one of the youngest NBA players ever.

Following the 2018/19 season, in which he achieved aa career high average of 27.7 points per game, he was named the league’s most valuable player, beating out Kyrie Irving and James Harden. The Greek star has also featured heavily for the Greek National Basketball team, enduring a continuous all-round successful basketball career.

Greek gymnast Eleftherios Petrounias was one of Greece’s strongest competitors in the 2016 Rio de Janeiro Olympics, and since then has won multiple global competitions. The artistic gymnastic secured a gold medal at the 2016 Olympics and has also received three first place awards at the gymnast World Championships, as well five first place awards in the European Championships.

Growing up as a hyperactive child, the athlete has a remarkable story, with his mother bringing him to the Panionios Gymnastics Club so that he could release his energy. He has two screws in his fingers due to physical damage sustained when he was younger. Petrounias is also prominently featured in anti-bullying campaigns, as he was bullied himself when he was child due to his small size.

The best female athlete of the year, Katerina Stefanidi secures her place as one of the greatest Greek athletes of the decade due to her overwhelming success in various competitions in the past six years. The Olympic pole vaulter won first place in the Rio de Janeiro 2016 Olympics, along with a World Championship win in 2017 and a European Championship win in 2018.

In the 2016 indoor season, she set a national record after reaching a height of 4.90 m at the Millrose Games, which ranks her at fourth place of all time in the event. The Athenian pole vaulter was born to athletes Georgios Stefanidis and Zoi Vareli, who competed internationally in the triple jump and sprints, respectively.

Che Jon Fernandes is one of Greece’s greatest Paralympian athletes from the past decade, competing in the men’s shot putt events. The Paralympian has won four gold medals in various competitions in the past decade, with one being secured at the 2016 Rio de Janeiro Paralympic Games.