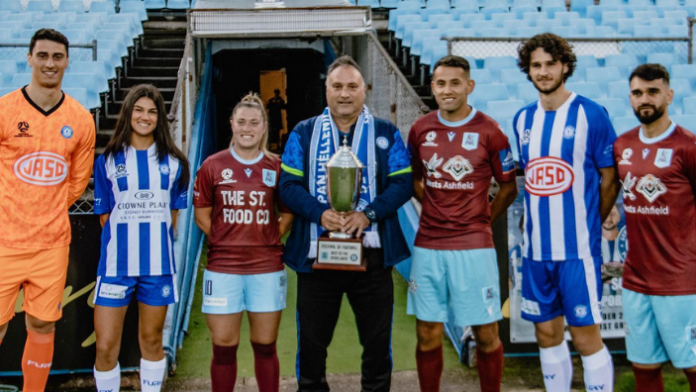 By Chris Spyrou and Takis Triadafillou.

The Festival of Football (FOF) is returning for a second year on Sunday, May 1 with Sydney Olympic FC and APIA Leichhardt FC competing to be crowned the ‘Best in the Inner West.’

The joint initiative by the Greek Australian Club and their Italian rivals took place last year at Lambert Park, with the 4,221 people in attendance witnessing Sydney Olympic win the first FOF Cup, earning not only the title but bragging rights to being the “Best of the Inner West.”

This year, Sydney Olympic is bringing the festival to home soil, with the event taking place at Belmore Sports Ground.

The four-round showdown which made its debut last year, promises blockbuster matches between SOFC and ALFC’s legends and current players.

For Sydney Olympic CEO, John Boulous, hosting the now annual event is a “great opportunity to gather the community and celebrate the history of two great clubs.”

“There will be something for everyone. On the field we will see the rising stars of our game in action, a match of new Olympics and APIA featuring former Socceroos, NSL and club players, a women’s match featuring close to 20 Matildas, Young Matildas and W-League stars and a men’s match between two of the toughest national teams of the league,” Boulous said.

“They always put on a good show, and this will be no different.”

With gates opening at 10.30am, crowds are promised a day packed with entertainment and culture both on and off the field.

WATCH Football NSW’s highlights clip for the Festival of Football 2021.

“This is an event for the community and we are looking for a large crowd to support what will truly be an unforgettable day.”

Tickets are now on sale on humanitix.