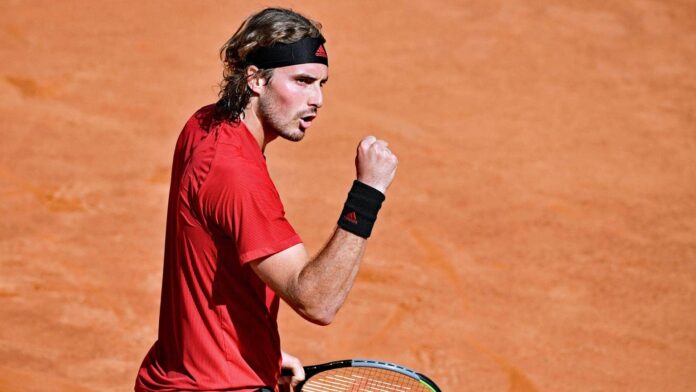 Second seed Stefanos Tsitsipas wasted no time in getting back to his winning ways in his Open Parc Auvergne-Rhone-Alpes Lyon debut, racing past Tommy Paul 6-1, 6-4 on Thursday to reach the quarter-finals.

The Greek has been one of the players to beat during the clay-court season since claiming his maiden ATP Masters 1000 crown at the Rolex Monte-Carlo Masters. Today’s victory gave him a Tour-leading 30 wins on the season.

“I [took] control of the match from early on, and after that I didn’t let go,” Tsitsipas said in his post-match press conference.

“I had a few opportunities in the second set to go up a double break and I missed a shot that I felt like I shouldn’t have missed. But [overall] I was playing good tennis today. I was able to move him around the court and find angles, press with my forehand. It wasn’t my best day on serve, but I found solutions when things proved difficult.”

Tsitsipas did not face a break point across two sets against the unseeded American. Paul, a former Roland Garros champion in the juniors, struggled to connect on his first serve – giving Tsitsipas plenty of opportunities to pounce on his opponent’s attackable second delivery. The Greek reeled off the last five games on the trot with a double break to claim the opening set, and started the second with a 2-1 lead.

Paul raised his level on serve in the second set, improving his first serve percentage from 38 to 71 per cent, but he was unable to make inroads on Tsitsipas’ serve. The Greek player served out the match to love, sealing the victory after an hour and 15 minutes.

In his ninth quarter-final of 2021, Tsitsipas will face Japanese lefty Yoshihito Nishioka next. Nishioka toppled fifth seed and home favourite Gael Monfils 4-6, 6-3, 7-6(2) earlier in the day.

“He is a player who is very fast, and I think that helps on clay,” Tsitsipas said. “He has clay-court tennis, so for sure I am going to take that match as an important one.

“I feel like I’m playing good tennis and I can play against anyone. For me, these matches are important, every single one of them. It’s going to be a battle against Yoshihito who is a lefty, on red clay which is my favourite surface.”