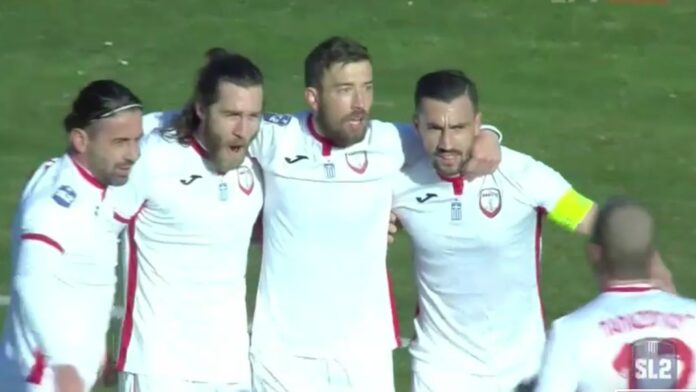 Xanthi FC striker Savvas Siatravanis thought he scored the club’s first goal of the season after slotting it past Apollon’s goalkeeper in the 14th minute, yet the lucky goal was labelled offside by the linesman. Shortly after, an instant replay showed the decision was an incorrect call by the match officials, yet the decision still stood.

Yet, it didn’t take long for Australian midfielder Joshua Brillante to break onto the scoreboard in the 16th minute, scoring from a well-worked play and cross from Athanasios Papazoglou.

Performing in snowy conditions, Xanthi FC’s attack seemed well-organised and free-flowing, a very similar style seen by Tony Popovic with former club Perth Glory. It is safe to say, however, that the defence was far less organised, with veteran goalkeeper Vítor Bento saving Xanthi on more than one occasion in the match.

While it looked to be a safe 1-0 victory for Xanthi, a late free-kick taken outside the away teams box ricocheted off Thymianis’ head, sailing into the top corner of the net. Initially believed to be Jurman’s own goal, the goal was reviewed and observed as coming off Thymianis into the net. The game concluded with a score of 1-1.

Joshua Brillante played the full ninety minutes and proved to be the club’s signing of the summer. Guiding the midfield from the back to the opposition goalpost, the Australian showed great leadership in a foreign country.

The match was Xanthi’s first fixture in the Greek second division, being relegated from the Greek Super League at the end of the 2019/20 season.

The squad is under the guidance of former Perth Glory head coach Tony Popovic, who was lured by the prospect of working for a European club with an Australian owner, Sydney Olympic director Bill Papas.

Convincing him to quit Perth Glory and join his venture overseas, Popovic said he is prepared for the challenge of coaching abroad and the responsibility of returning his new club, Xanthi, to the country’s top division.

“The idea was to join a first division team, but I’m accepting if it is second division. I believe in myself and know I have the knowledge and experience to succeed,” Popovic told Optus Sport.