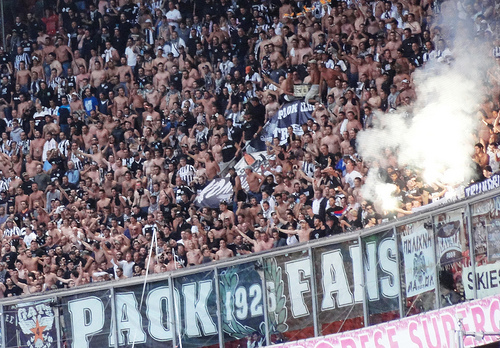 Greek government spokesman Stelios Petsas condemned the attack at the office of a New Democracy lawmaker by PAOK fans in the northern port city of Thessaloniki on Wednesday evening.

“We understand the love the friends PAOK have for their team, but we consider any violence unacceptable,” he said. “Violence has no room in democracy.”

A group of people believed to be supporters of Thessaloniki’s PAOK club sprayed slogans on the walls of the office of Stavros Kalafatis, the general secretary of ND’s parliamentary group. They also threw flyers with slogans such as, “Hands off PAOK.”

A group of PAOK fans also shouted slogans outside the office of ND lawmaker Elena Rapti in central Thessaloniki.

The incident came after Parliament on Wednesday approved a controversial legal amendment that will prevent clubs PAOK and Xanthi from being relegated due to alleged infringement of ownership rules.

The amendment, which was passed by 156 votes to 90, changed the penalty for such infringements from relegation to a deduction of 5-10 points.