Athina Pitta: One of the most promising talents of the Rafa Nadal Academy 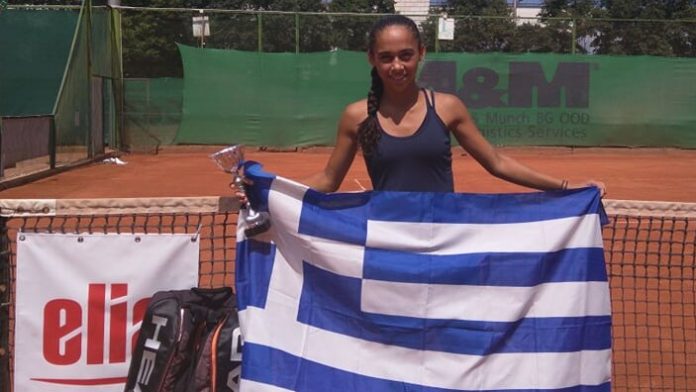 Her talent, evident by the number of titles she won against kids of her age, led her to look at the sport from a more professional angle and join academies with qualified instructors who could help put her on the path to success.

At the age of 14, young Athina moved to Spain where she joined the Rafa Nadal Tennis Academy, completing a two-year training program with flying colours. She spoke to The Greek Herald about her experiences from Mallorca, her love for the sport, but also her years playing tennis in Melbourne.

TGH: When did you start playing tennis? What made you choose that sport?

My parents wanted both my brother and me to be involved with athletics from very early on. I tried many sports, but tennis was the one that ‘stuck’. It’s a great sport that pulled me in from the get-go. I was good at it, so I continued playing and a few years ago we decided that we wanted to look at it a little more seriously. I started playing when I was four (years-old) at the ‘Ifitos Stavroupolis’ academy in Thessaloniki.

TGH: You’ve already been able to distinguish yourself among your peers, which gave you the opportunity to train at the Rafa Nadal Academy

Yes, I spent two wonderful years at Nadal’s Academy in Mallorca. My former coach, Babis Anesiadis, was the one that helped me get in. He took me to the Rafa Nadal Tennis Center in Chalkidiki and the instructors there recommended that I send my CV to the Academy, which was eventually accepted.

TGH: And now that you’ve returned to Greece, you continue your training at the Phivos Michalopoulos academy in Larissa

I’d like to take the next step in my career and raise my level. Furthermore, unfortunately in Greece it’s very difficult for athletes to find sponsors who are willing to help, despite my family’s many efforts. In my case, I was lucky since Mr. Michalopoulos and his team really know how to prepare an athlete for the professional world of tennis. Which is why I chose that specific academy and I am very happy with my decision.

TGH:Who would you call role models for a 16-year-old athlete who is just starting their career in the world of tennis?

Stefanos (Tsitsipas) and Maria (Sakkari) are two very important role models for me. They’ve proven that if you try hard enough and work day and night, you can make your way into the worldwide rankings. Beyond that, I’d have to say that (Rafael) Nadal is also someone I can look up to. He gives everything he’s got even during training!

TGH: Would you describe this as a ‘golden age’ for Greece in tennis?

For sure! The accomplishments of both Stefanos and Maria have put us on the map of tennis worldwide and the great thing about this is that there are many athletes coming up behind them. Nowadays there are more kids who want to play tennis (in Greece) compared to even a few years ago. Additionally, the facilities are slowly becoming better and are beginning to reach the standards that can be found abroad. The one thing missing from Greece, to complete the package of this ‘golden era’ as you described it, is a professional tournament. There are efforts being made in this regard, like the Futures series held by the Lyttos Beach in Crete, yet in my opinion we require one or two grand competitions so that we can become a key player of the world tennis scene.

TGH: Besides Greece, you have some family in Australia as well.

Yes. My grandfather, Nikos Pittas who was originally from Sindos in Thessaloniki and my grandmother, Athena Telli who was from Kos island, lived in Australia for many years. That’s where my father Yiannis was born and I still have a lot of family there.

In fact, I was there back in 2017 and I trained at the Kooyong Academy with Glen Busby as my coach, where I participated in a couple of tournaments, winning the first and finishing in the runner-up position in the other. I really enjoy the atmosphere of Australia and there are people there who have helped me a lot!

Athina says her main goal right now is to climb the ranks of the junior divisions and eventually have the opportunity to play in a Grand Slam. But, looking further ahead into the future, she wants to have a spot within the professional tours and make a living out of doing what she loves best.

READ MORE: The new wonderkid of Greek tennis, Michaela Laki, puts no limits on her dreams