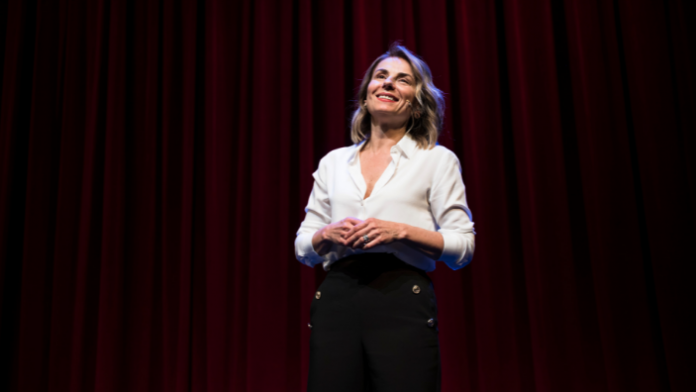 Walking into the Sydney Opera House Playhouse Theatre on Thursday night for the world premiere of Mary Coustas’ one-woman comedy show, This Is Personal, was a surreal experience.

For years, I have pictured Coustas as her iconic 90s character Effie from Wogs out of Work and Acropolis Now.

But now I, along with hundreds of other people from the Greek and wider community sitting in the theatre, were willingly attending a show where Coustas promised to show a more personal side of herself that’s never been seen before.

“I felt like it’s time to sort of go commando without the comfort and security of Effie. And to really strip myself back away from the bells and whistles,” she told The Greek Herald ahead of the show in April.

From the moment Coustas walks onto the stage until the moment she walks off to loud applause and a standing ovation, I am enthralled with the way the Greek actress explores how love, loss, laughter and fear played a huge role in her everyday life.

She touches on growing up in Australia enduring casual racism, her close relationship with her father “the man with the cotton wool face” and the best advice, the impact of her father’s death, how she became Australia’s favourite “wog,” and how she survived successive rounds of IVF to become a parent to her daughter Jamie at 50.

Of course though, amongst all these challenges and unthinkable loss, Coustas sprinkles in hilarious anecdotes of family life such as her “good looking” mum, her vomiting aunt, the sexist uncle and a scene where she recreates the interpretive dance she performed in front of her family at her acting graduation show.

It was after witnessing this scene that Coustas’ dad turned to her and said: “Mary, no-one needs to see that. Tell your stories.”

That’s what she’s done ever since and This Is Personal is no different.

It might not have been the Coustas we’re used to – as only a flash or two of her Effie character came through – but she definitely kept her promise and that’s good enough for me. For us. For the Greek community that had the opportunity to enjoy Mary’s debut at the Opera House, the architectural masterpiece that immigrants like her father helped built just a few decades ago.