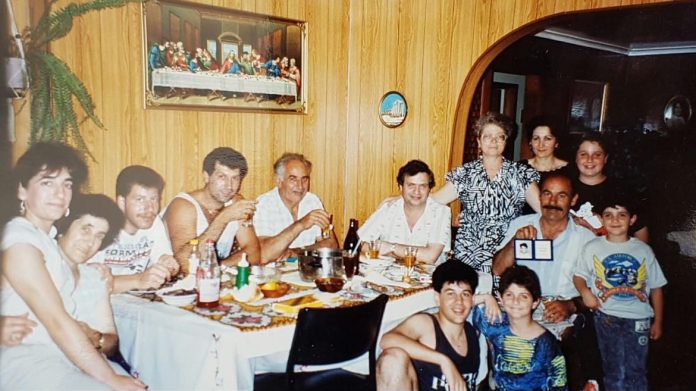 The smell of charcoal and meat swells through the house and down the street, acting as a beacon which guides family and friends to the doorstep.

The door stays open as they flood through bearing plates of food and drink, and congregate around the barbeque to see if they could score a piece of tender lamb.

Yiayia cooked enough food to feed the suburb, with homemade dishes that have been passed on from generations covering the dining table.

The cousins run around the streets for hours and play, and make their way back either from the sun setting or from hearing theia shouting names.

Deep within our bank of memories, most of us can think of a time where this typical Greek scene had taken place when celebrating one’s name day.

Celebrating Greek name days is an Orthodox tradition observed throughout Greece. Each year, Greeks celebrate the feast day of the Christian saint, holy person, or martyr after which they are named.

Greeks also phone the person whose name day is being celebrated, usually wishing them “many years of life” or “Hronia Polla”.

Greek migrants brought their traditions with them to Australia, alongside their suitcases. This included Easter traditions and name days.

It was very common for the person celebrating their name day to host family and friends at their house, typically having a barbeque. Usually, people would also gather to have picnics, which would turn into whole-day outings. These new traditions became a norm in the Greek community.

I ask my dad how the celebration of Greek name days have changed from his perspective as a first generation Greek Australian who grew up in a migrant household.

“People used to have more respect for the name day and celebrated without reservations, however nowdays, people are ‘busy’ and are a lot more reserved,” he says.

The celebration of name days has become less common as the decades progress. Greeks tend to focus on celebrating their birthday, just like they do in most western countries, putting the name day aside.

It has also become less common to drop into people’s homes without an invitation or calling out of courtesy.

‘Times aren’t how they used to be’:

In late May, people named after the Saints Konstantinos and Eleni celebrated their name day.

Extended family of mine hosted the celebration at their Melbourne home. It was casual and people were dropping in throughout the day to have a drink and meze in celebration of the person’s name day.

This was the first time I had been to such a celebration since I was little.

I was hit by waves of joy, wholeness and nostalgia, which brought back memories of past events that had gotten lost over the years.

The house was a typical ethnic 80’s style design, draped in doilies and floral carpets. Framed photos covered the walls and shelves, displaying grandchildren and children.

You could hear the rattling of glasses being taken from the cabinet which was rarely used. My cousin asked if we were expecting a visit from the Queen as the cupboard opened and revealed the shiny brassware and fine china that nobody had known existed.

It brought back the nostalgic feeling of being at my yiayia and pappous’ house in Sydney, even if they were 600 miles away.

Reuniting with family, sharing food, catching up on lost time. This led to my realisation that times aren’t like how they used to be.

Instead, birthdays have become more extravagant, resulting in there being barely any focus left on name days at all.

Simpler times saw birthdays celebrated with family at home or at a park. Homemade food would be shared around alongside enough drinks to cater for a village. The birthday cake would usually be a vanilla continental cake with the name of the person written on the top with coloured gel.

I would love to see the return of the name day tradition.

Events like these bring so much joy, and my generation and generations to come should be able to experience the same feeling of excitement name days bring.

But nothing happens without a little bit of effort. What can we do?

Take a walk to the local Greek Deli and purchase a calendar, or have reminders for name days on our phones.

Wish someone “Hronia Polla” or host friends and family once in a while to keep this tradition alive within the Greek Australian community.

It is important not to forget our Greek culture and the little things can make a big difference!

*Anastasia Fokianos is a senior student at Alphington Grammar School in Melbourne and has been interning with The Greek Herald this week.