Remembering the life of a great man and grandfather: Antonios Dolmas 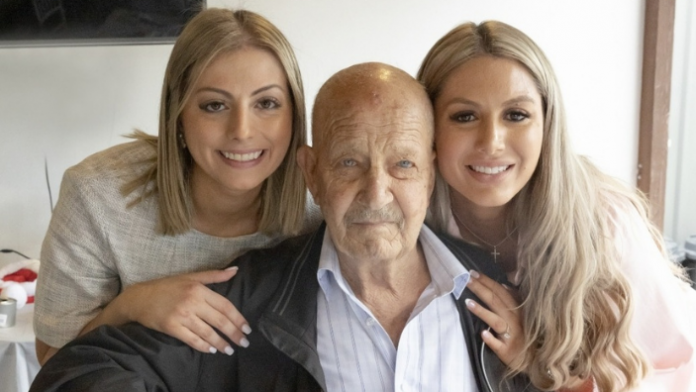 Antonios Dolmas was a great man. He was dearly loved by his children, grandchildren, great-grandchildren, and the wider Greek Community. Although he came from simple beginnings, Antonios worked as a bricklayer and held a long withstanding reputation within the Greek community for helping people with their building extensions and renovations. Hard work and determination characterised this strong and loving father, grandfather and great-grandfather.

He was born to Emanuel Dolmas and Irini Toutounis in a small village north of Greece, Domatia, on February 5, 1944. His childhood was best described as humble and wondrous; while their family got on by what meagre money they made from their tobacco farm, young Antonios helped on the farm and played in the nearby farm fields. The time spent with his father cultivated a love for the outdoors that would stay with Antonios for his entire life. Antonios shared his childhood with his siblings: Stelios, Yiannis, Dimitrakis, Theodora and Nikos.

In 1960, in a nearby village, Ofrinio, whilst Antonios was visiting his brother, he met the love of his life Polyxeni whom he would later marry. A brief break from love, he went on to serve the military army and finished his services in 1965. In 1967, Antonios married Polyxeni in the church of Saint Konstantinos and Helen in Attica (Brachami). The love story continued, and the couple welcomed two children, Irene and Maria.

Antonios and his family migrated to Lakemba, Sydney for a better life. He embarked in a bricklaying career, building homes and friendships until his retirement. Antonios’ passion for outdoors, drove him North of Sydney to a small rural town called Krambach. Here he purchased a large piece of land where he would go on to build a small holiday house- all by himself. He would frequently visit Nabiac Hotel were he went on to make new friends.

Antonios pursued his many endeavours diligently and always rose to meet a challenge. In the early hours of the morning, he would be out in his veggie patch. Harvesting and sharing his home-grown veggies with anyone he crossed paths with. He would spend hours preparing wine and went on to share this with everyone that would visit him. Antonios was a keen honey collector, he would patiently and eagerly wait for honey to be produced and would happily gift his homegrown honey.

As the years grew, so did the family; Antonios’ daughter Irene married Paul who soon later welcomed Antonios’ first granddaughter Maria, and after a few more years, his second granddaughter Polyxeni.

His proudest moment was when he became a great-grandfather to Gregorio and then Paul. Antonios would regularly visit his great-grandchildren showering them with love and gifts. Antonios was soon re-named ‘Pappou Doni’ by his eldest grandson, Gregorio.

Antonios was a social person, his favourite local spots to visit were The Belmore Hotel and The Lakemba Greek Community Club. He frequently travelled to his homeland Greece and would spend the entire summer catching up with family and friends.

A man that lived a simple yet rich life, surrounded with his favourite things life had to offer- family, friends and ouzo.

His love was unconditional, and this is something we will cherish from his character. His kindness and generosity will be remembered by all who had the pleasure of knowing him.

Your presence we miss, your memory we treasure, loving you always, forgetting you never.

Join us to celebrate the life of Antonios Dolmas on Thursday 17th February, at St Euphemia Greek Orthodox Church from 12.30pm.