Pompeo: ‘We urge everybody to stand down in east Med’ 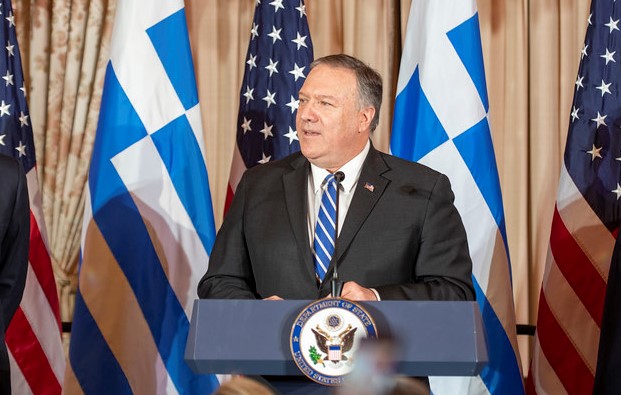 The United States is urging “everyone to stand down” in ongoing disputes about drilling and maritime rights in the East Mediterranean, Secretary of State Mike Pompeo said on Wednesday.

“President Trump’s been in conversations with President Erdogan, he’s spoken with the Prime Minister in Greece,” Pompeo began during a press briefing in Washington.

“We’re urging everyone to stand down, to reduce tensions and to begin to have diplomatic discussions about the conflicts that exist there in the Eastern Mediterranean, the security conflicts, the energy resource conflicts, the maritime conflicts.

“They need to sit down and have conversations about this and resolve this diplomatically. It is not useful to increase military tension in the region; only negative things can flow from that.”

Asked about Washington’s decision to lift an arms embargo on Cyprus – a move that has angered Turkey – Pompeo said it was “a long time coming.”

“We know that this decision was announced in light of heightened tensions in the Eastern Mediterranean but we thought it was the right thing so I made the decision that we would move forward with it,” he said.