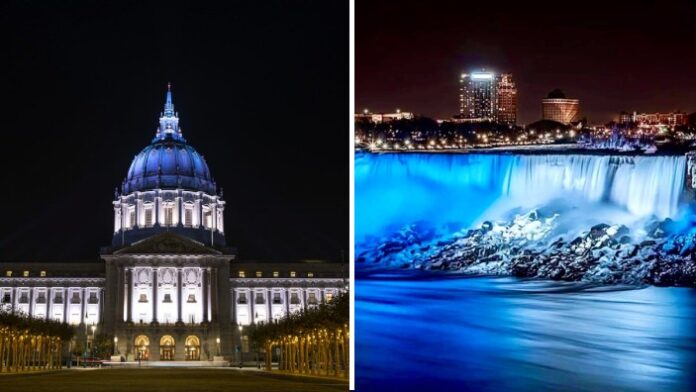 In every corner of the world where the Greek diaspora reside, important landmarks will be lit blue and white on March 25 to mark the 200th anniversary of the Greek Revolution.

Here’s our rundown on what you can expect to see over the coming week:

“We are proud to share in this proud moment of history with the Greek community of NSW,” the Premier wrote in a statement.

The City of Randwick in Sydney also has banners flying throughout the community, while Council will also raise the Greek flag on March 25 and hold a civic reception.

A number of buildings will also be illuminated in Blue and White on the night of March 25 including: The National Carillon Bell Tower, Black Mountain (Telstra Tower), Questacon, Ian Potter House, The National Museum of Australia, The Hellenic Club of Canberra, The Greek Embassy in Australia.

In Melbourne, top landmarks will also be lit up in blue and white to commemorate the Greek bicentennial this year.

American cities from East to West will honor the nation of Greece, as well as the many millions of Greek-Americans who are part of the fabric of the country.

In San Francisco, the City Hall will be illuminated with the colors of the Greek flag on March 25.

The City of Los Angeles will mark the celebration of the Greek bicentenary by illuminating the iconic pylons outside its international airport, LAX.

Other buildings and areas which will also be illuminated to show respect for the Greek Bicentenary, are the Richards/I-5 underpass, the Capitol Mall, the K street Tunnel, City College Pedestrian Bridge, Memorial Auditorium and the McKinley Underpass.

The Santa Monica Pier’s “Pacific Wheel” will have a special, evening-long Light Show for Greek Independence Day on March 25.

The cities of Boston, Lowell and Fall River in Massachusetts, as well as Providence, Rhode Island and Manchester, New Hampshire, will also light up their iconic bridges and city halls in blue.

The mayor of Toronto, John Troy, Councillor Nick Mantas and Consul General of Greece in Toronto, Victor Maligoudis, will oversee the illumination of the iconic CN Tower in Toronto on Wednesday, March 24, at 8 pm EST.

The iconic Niagara Falls, the largest waterfall in North America, which is shared between Canada and the US, will also light up with the blue and white colours of the Greek flag.

The largest (1,500 square meter) thread-sewn Greek flag ever produced will be flown as part of the celebrations.

A large-scale “Greek Freedom Dance” was choreographed to an original composition produced by one of the Greek South African community’s scholars as well.