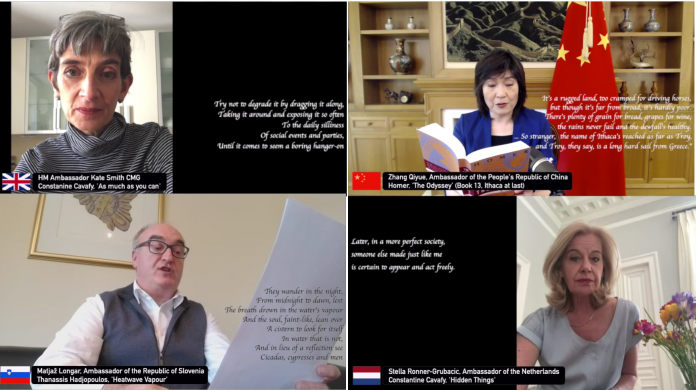 Foreign diplomats from 18 countries have recited Greek literature in support of Greece’s “Stay Home” campaign against the spread of coronavirus. The video, featuring a compilation of half the participating foreign representatives, was posted by the Greek Foreign Ministry on Facebook and Youtube Thursday.

The video was released under the title “We #StayHome and travel through literature,” and produced through the initiative of the General Secretariat for Public Diplomacy, Religious and Consular Affairs.

“Through the universality and the timelessness of Greek literature, from Homer to the present day, [the envoys] are sending their own message of international solidarity against the pandemic,” the General Secretariat said in a statement.

Read More: Letter from the Editor: #KeepItGreek while we stay at home

The diplomats selected a variety of poetry excepts from legendary Greek poets Homer, Constantine Cavafy Odysseas Elytis and Titos Patrikios. Some chose to read the excerpts through English translations, while others recited them through their traditional Greek writings.

The video featured only nine of the participating 18 countries, with the second part to be released next week. Ambassadors of countries that were present in the video released yesterday included England, Sweden, The Netherlands, Mexico, France, Austria, China, Israel and Slovenia.