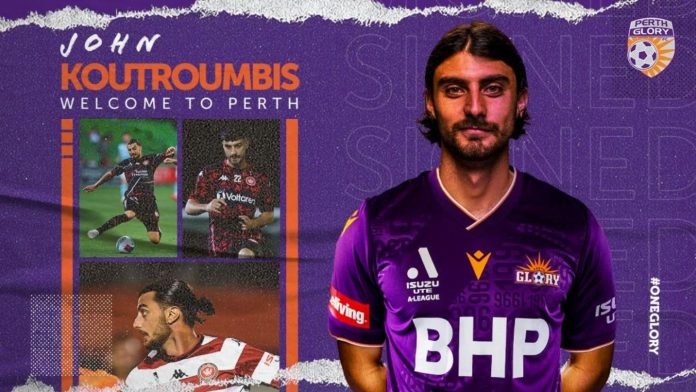 Perth Glory is delighted to confirm that versatile defender John Koutroumbis has signed a two-year deal with the club.

The 24-year-old, who can operate at centre-back, right-back and in midfield, has chalked up over 100 ISUZU UTE A-League appearances since making his debut for Newcastle Jets in October 2016.

He spent five seasons with the Jets before completing a move to Western Sydney Wanderers for whom he made 16 starts last season.

The former Australia Under-23 international is looking forward to continuing his football journey with Glory.

“My decision was made easy by the way the Head Coach [Ruben Zadkovich] and others behind the scenes spoke about the new project that is going on at the club,” he said.

“Being a part of something new and exciting sets a challenge that has unlimited potential and it motivates me.

“On a personal level, my short-term goal with the club is to make Finals and push as far as we can as a collective.

“My long-term goal is to eventually, with the help of the coaching team at Glory, sign a professional contract in Europe and win my first cap for Australia.

“I’d like to add that I’m so excited to get started with the team, to meet the lads and help build a culture of a winning mentality and get Glory back playing Finals football.”

Zadkovich believes that Koutroumbis can make a big impression here in the West.

“I’m very happy to have Johnny on board,” he said.

“He is a player I’ve followed for a very long time.

“He was playing regularly when he was quite young alongside a very close mate of mine, Nikolai Topor-Stanley, during his time at Newcastle.

“Johnny has made very good progress since those days and his game has really developed.

“That being said, I don’t think he’s anywhere close to his ceiling yet as a player, which is exciting.”

“His versatility defensively and composure in possession will make him a very important piece of the puzzle.”

Those sentiments were echoed by Glory’s Head of Recruitment, Andy Keogh.

“We have worked hard to get this deal over the line and we welcome Johnny with open arms to our beautiful city,” he said.

“His attributes are exactly what we need in our team and the way he carries himself is exactly what our club needs.

“We can’t wait to see him wearing the famous purple in WA.”

Adelaide-born Koutroumbis started out with West Adelaide before joining Adelaide United for whom he featured regularly in the NPL South Australia.

The 1.83m defender’s senior breakthrough came following his 2016 move to Newcastle and he went on to start 12 games during his maiden A-League campaign with the Jets.

Glory’s new recruit departed the Jets in 2021 to link up with Western Sydney and he was a regular starter for the red-and-blacks last term.