US turns to using Greek alphabet to name hurricanes 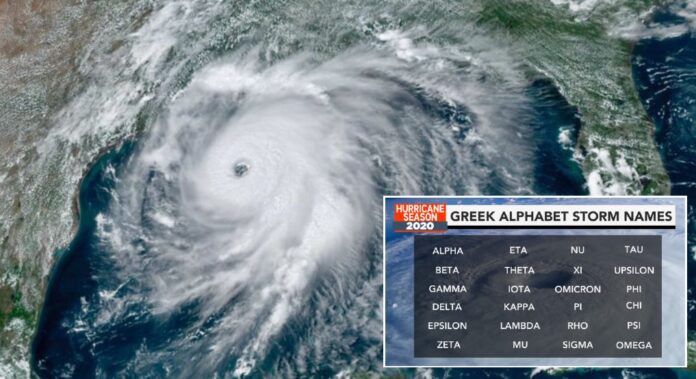 Having reached the end of the list of 21 names provided by the National Hurricane Center, the US will turn to using the Greek alphabet to label impending hurricanes.

Should a severe cyclone off the East Coast hit US shores, it will become ‘Wilfred’; The final name prepared by the National Hurricane Center.

“Once we exhaust the last name on the list, which is Wilfred, we then have to switch to the Greek alphabet and you will start to see names such as Alpha, Beta, Gamma, Delta, Epsilon, Zeta etc,” the WMO’s Clare Nullis told reporters.

According to the World Meteorological Organization (WMO), this will be the second time in history that the Greek alphabet will be used.

This year’s season is set to be the busiest ever with the US National Oceanic and Atmospheric Administration forecasting a record 25 storms which it attributes to warm sea temperatures and low wind-shear.

Occasionally, a storm name is “retired” by the committee if it proves to be very destructive, such as Mitch which struck Honduras in 1998. However, the WMO states that letters of the Greek alphabet that are used for tropical systems cannot be retired.

“If a significant storm designated by a letter of the Greek Alphabet, in either the Atlantic or eastern North Pacific Basin, were considered worthy of being ‘retired,’ it would be included in the list of retired names with the year of occurrence and other details, but that particular letter in the Greek Alphabet would continue to be available for use in the future,” the WMO explained.

Nullis said the WMO is then bombarded with replacement requests. “Either people are outraged that a storm has their name or they say: please name it after my husband or wife.”