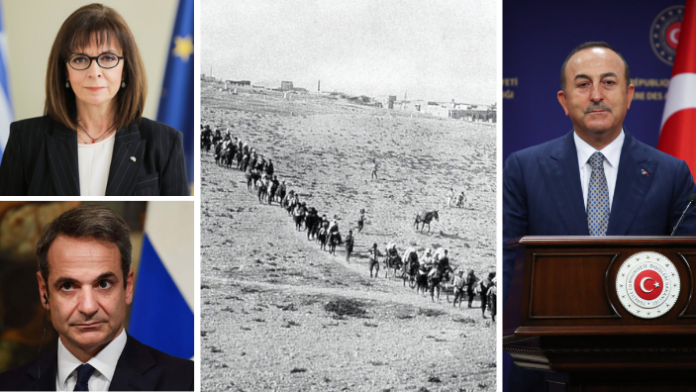 Greece commemorated on Thursday the 103rd anniversary of the Greek Pontian genocide where 353,000 ethnic Greeks living on the shores of the Black Sea were systematically exterminated by the Ottoman Turks.

Greek President, Katerina Sakellaropoulou, was the first to issue an official statement marking the anniversary and called for the international community to recognise the genocide.

“The international community has a manifest obligation to safeguard historical knowledge by recognising this unconscionable crime,” Sakellaropoulou said in her statement.

“Today’s anniversary in particular, coming at a time when authoritarian revisionism poses a direct threat to global stability, serves as a deterrent so that we may never experience such atrocities again.”

“We welcome May 19th, paying tribute to Pontian Hellenism in every corner of the world. Strengthening the country’s protection and upgrading its international standing. And transforming into a battle the two words that come with every trial this nation has gone through: I will not forget!” Mitsotakis said.

These statements prompted the ire of Ankara, with the Turkish Foreign Ministry issuing a strongly worded statement lashing out at the Greek officials.

“We categorically reject the delusional statements made by the Greek authorities on the pretext of the anniversary of the unfounded ‘Pontian’ claims, which completely distort history,” the Foreign Ministry statement reads.

“It is clear that the efforts of those who try to draw enmity from history and mislead the young generations will not serve peace and stability.”

The Ministry concluded its statement by calling on Greece “to work together for peace, stability and a prosperous future on the basis of cooperation instead of trying to distort the facts.”