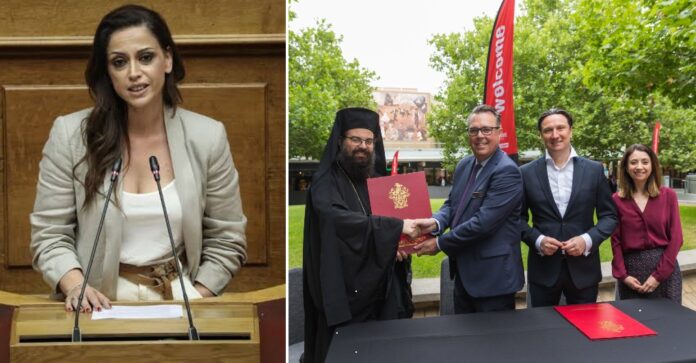 The Radical Left Coalition (SYRIZA) have sent a letter thanking Greek diaspora organisations for acting quickly to save the La Trobe Greek Studies Program, which was under threat of being terminated.

SYRIZA MPs raised the Greek Studies issue in the Greek Parliament on November 28, requesting that the government take action.

“….We wanted to add our voice to your own voices and efforts and we called on the Greek government to take initiatives,” Rallia Christidou, SYRIZA MP, said in her letter to the Greek Orthodox Community of Melbourne last month.

In response, Greece’s Deputy Foreign Affairs Minister, Kostas Vlasis, expressed the Greek Government’s assurances they will do everything possible for the continuation of the program.

“The continuation of the Greek Studies Program is a top priority, because it has for us, the Hellenism of Victoria and also the Greek community in Australia, a substantial and special emotional value,” Mr Vlasis writes in his letter.

The La Trobe Greek Studies program was saved with the persistent efforts from the Greek community in Australia. The Greek Community of Melbourne committed to providing $192,000 over three years as well as proactive assistance in ensuring the program reaches a financially viable enrolment target after semester 1 census in 2023.

In a letter sent by Rallia Christidou on Friday, the SYRIZA MP reassured that the opposition party is “at your disposal” for any other issue related to the Greek diaspora in the future.

“We consider issues that have to do with Greeks abroad and Greek Diaspora of the greatest importance and we are always happy to communicate and to help in any way possible,” Rallia Christidou said.

The La Trobe Greek Studies Program is to continue for another three years, with the program to be reviewed after semester 1 census in 2023.