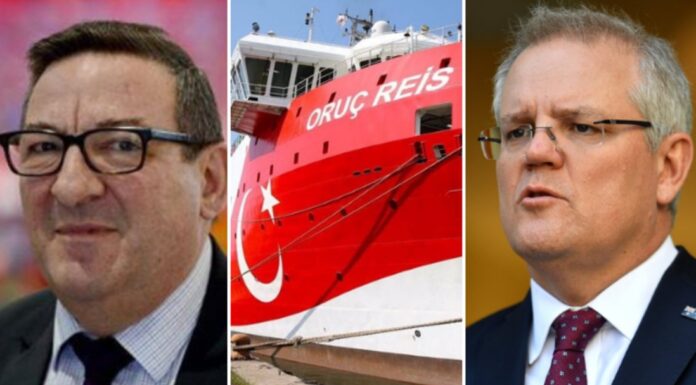 Further to his letter in August to the Prime Minister, Member for Adelaide Steve Georganas is once again addressing Eastern Mediterranean dispute between Greece and Turkey. The Federal MP has called on Scott Morrison to finally address the issue plaguing European waters, denouncing Turkey’s illegal actions.

Below is Georganas’ full letter to the Australian Prime Minister:

Recent media reports have covered the escalating tensions now ensuing in the waters of the Eastern Mediterranean Sea. This has been confirmed through numerous community representatives, and by many of my constituents in the seat of Adelaide who are from countries surrounding this area of heightened tensions. A great number of my constituent also have family members in this region.
Turkey has become increasingly active in the Eastern Mediterranean in its efforts to explore for oil and gas, and at times has demonstrated outright defiance of the established exclusive economic zones (EEZs).

This endeavour to pursue oil and gas explorations within the EEZ, with little regard for international law, has resulted in an ongoing conflict with other parties in the region.

For example, and according to media reports, Turkey and Greece — both NATO members — have been conducting rival naval exercises off the Greek island of Crete. And, recently Greek officials reported that the United Arab Emirates (UAE) would dispatch F-16 fighter jets to Crete for joint training exercises to be conducted.

In addition, it is understood that the German Foreign Minister will be visiting both nations, Turkey and Greece, in a diplomatic effort to diffuse the escalating tensions arising in the Eastern Mediterranean.

This is an extremely volatile, troubling situation which should concern all nations.

There is no doubt that the territorial and maritime disputes in this region have almost brought these two countries close to war in the past.

Maintaining peace in the region is delicately balanced by the continued adherence to the established EEZs regulations and by respecting the rights of territorial waters.

The people in my community who are from this region are anxiously awaiting these tensions to subside — and have been contacting me.

As a democratic nation, we should play our part to ensure that the delicate peace and stability in this region is preserved — and in line with the agreed sovereignty of all the nations involved.

In addition, it is in Australia’s interest that we join the international community to defend the territorial rights according to the UN Convention on the Law of the Sea, which grants a continental shelf and EEZ to the islands within territorial waters of the Eastern Mediterranean.

This is of particular importance to Australia.

If such a precedence were to be set as a result of the territorial dispute in the Eastern Mediterranean, this may have unintended repercussions and consequences for other nations, including Australia.

I therefore urge your Government to utilise all possible avenues and diplomatic channels available to encourage a peaceful resolution of this critical situation in the Eastern Mediterranean – and highlight the importance of achieving sustained mutual respect and understanding in the region.

I look forward to your response at your earliest convenience.