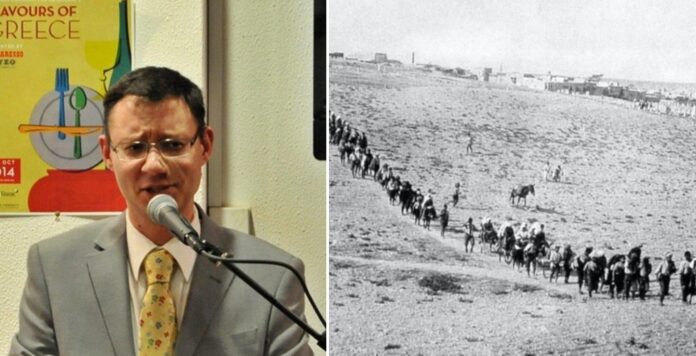 Dean Kalimniou will present a lecture entitled Pontian Genocide Memorial Seminar: William Lloyd and the Liberation of Pontus, on Thursday 13 May, at 7.00pm, at the Greek Centre, as part of the Greek History and Culture Seminars, offered by the Greek Community of Mlebourne.

This is a joint event with the Pontiaki Estia.

While there was little pre-War engagement with Pontus in Australia, one man, William Lloyd, did his utmost to draw attention to the plight of the Greeks of Pontus and call for their independence. His story is as fascinating as is the process of verifying the astonishing events that colour it.

Dean Kalimniou is also a well-known lawyer, poet and short story writer within the Greek community. As a journalist he is popular within the Greek community of Australia through his column in the Melbourne Greek newspaper Neos Kosmos, entitled Diatribe, which has been running since 2001. He has published six poetry collections and has also translated numerous works of prominent Greek-Australian authors from Greek into English. In November 2007, Dean Kalimniou was awarded a Government of Victoria Award for Excellence in Multicultural Affairs.

This is a hybrid seminar (speaker will be at the mezzanine level while event broadcast on Facebook/Youtube).