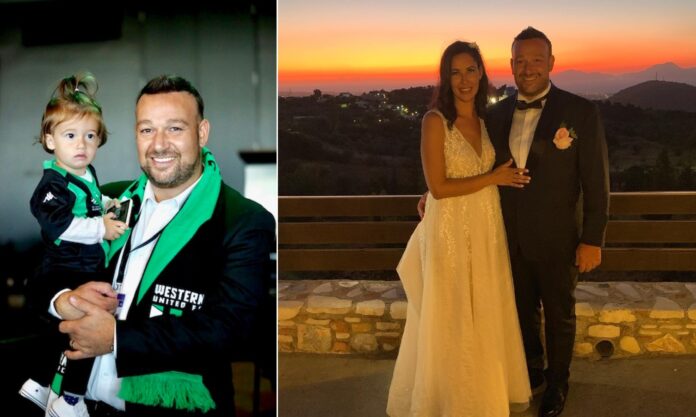 To observe the powerful connection that Greek Australians have with sport, people need to look no further than the leaders of some of the nation’s biggest sporting clubs, stretching across the NRL and A-League.

Yet, there are none prouder of their heritage than Jason Sourasis, Chairman of Western United FC.

Jason’s family is part of a long list of Kos Club Melbourne presidents. His father was president of the club in the 1970’s, with his mother, Kerry, holding the fort as the current president.

“As you get older, you appreciate the Greek heritage. All those Saturdays I missed out on sports to go to Greek school, but I’m thankful I did go,” Jason Sourasis says to The Greek Herald.

The main struggle, recognised by many Greek association leaders in Australia, is to keep the club’s historical importance alive, while building its relevance with the second and third generation Greek-Australians.

“But how do you hand it down? I’ll be passionate about my kids speaking Greek but a lot of kids don’t speak it, so how do you hand down the heritage and the love of Kos?”

Jason says that the love for his Greek heritage, particularly for his home island of Kos, began when first went to the island as a young adult. Since then, he takes his family and guests every year to experience its natural beauty.

“I brought some of the biggest athletes from Australia to Kos, including Scott Pendlebury who is the captain of Collingwood Football Club, Jack Ziebell who is captain of North Melbourne.”

“Everyone who knows me, knows my love of Kos… so I like to say I’m putting Kos on the map,” Jason says jokingly.

Jason got married in Kos in September 2019 at a small church in the beautiful town of Zia, which rests on the slopes of Mount Dikaios. Jason also baptised his youngest daughter in the same church one month later.

Recognising his connection with his homeland, Jason says there’s “no doubt” him or his children will take the reigns as president.

“Me or my kids will be connected with the club forever.”

Jason Sourasis on Western Unted FC: “We’re in it for the long game”

Western United FC was one of two clubs, along with Macarthur FC, that was established as part of an expansion process in Australia’s domestic football competition, the A-League.

“My happiest childhood memories were going with Dad and all my cousins to the football,” Jason says.

“It was another place in the 70s and 80s where you went to feel safe, but you went there for that great pride of South Melbourne.”

Jason is director and founding member of Strategic Financial Group Australia, which primarily invests in portfolios of assets within sectors, with sports being a high valued sector.

“We represent other people’s money and are ultimately always looking for new big opportunities,” Jason says.

According to Jason, Western United FC was the first public private partnership in sport to be identified in Australia.

“The private city council, Wyndham City Council, is our partner. They’ve given us a lot of land in return for us developing it and building a stadium, an elite sports precinct for the community, which we will co-own with Wyndham.

“But ultimately, we had to get a team and a national competition licence to trigger that partnership.”

Part of the club’s mission, Jason says, is to bring the community in the West together through sport, similar to Western Sydney Wanderers successful efforts in the greater Sydney region.

“I think that the tribalism that ethnicity used to bring in, which brought up good and bad, I think that’s going to be replaced by geographical tribalism,” Jason says.

“It’s a longer term game for a more sustainable game in Australia, because you just basically get people that are born in the west of Melbourne or the west of Sydney supporting Western United or Western Sydney Wanderers.”

Adding to this, Jason says he is proud of the way Western United fans have accepted the newly formed club, with fans stretching from Geelong to Ballarat.

“Especially for a covid year to end up with five thousand odd members and a pretty loyal supporter base. We think it’s a really good foundation for what we’re planning for years to come.”

“I think we’re aiming for seven to ten thousand members this year in our second year. But again, we’re doing so much community work at schools, at soccer clubs, and ultimately we’re in it for the long game.”

Jason concluded by saying that the club has added great strength this year, bringing in exciting young talents while keeping veterans such as Alessandro Diamanti, who finished the 2019-20 season as the best player of the year, and Besart Berisha.

“So I’d be disappointed if we didn’t go a little bit further… making the grand final. So that’s our that’s our expectation for this year.”