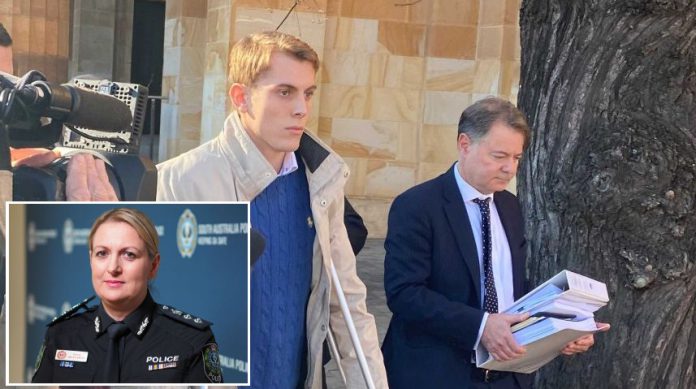 Prosecutors will explore whether a young man who allegedly caused a crash that killed two Adelaide mothers in April was having a “manic episode” at the time, a court has heard.

Harrison Kitt, 20, today walked into the Adelaide Magistrates Court on crutches to face the allegations for the first time. He has been charged with two counts of dangerous driving causing death and is yet to plead to the allegations.

Senior Greek Australian police officer Joanne Shanahan, 55, and mother Tania McNeill, 53, died in the crash at the intersection of Cross Road and Fullarton Road at Urrbrae on April 25.

Prosecutor Patrick Hill told the court that investigators had already taken 90 witness statements but still had to seek further material.

He said Major Crash investigators were yet to undertake a “complex scene reconstruction” that would determine the speed Mr Kitt was travelling at before impact.

“We need statements from medical personnel who treated the accused after the crash,” he said.

The prosecutor said investigators also needed to explore Mr Kitt’s mental health and behaviour in the week leading up to the crash.

“We need a formal inquiry into the accused’s mental state at the time if there’s to be a declaration he suffered a manic episode or psychosis,” he said.

David Edwardson QC, for Mr Kitt, told the court that drugs and alcohol were not factors in the crash. He said reports into his client’s mental competence could not be ordered until he has been committed to a higher court. The case was adjourned for eight weeks.

Joanne Shanahan (nee Panayiotou) was a mother-of-two and well-respected Detective Chief Superintendent prior to her tragic death.

“Not only have we lost a beautiful person, we’ve lost a detective with a wealth of knowledge,’ Commissioner Stevens told media upon her death.

Police officers and SA community bid a public farewell to Joanne on May 8, with police flanking the streets of Adelaide’s inner south to say their last goodbyes.