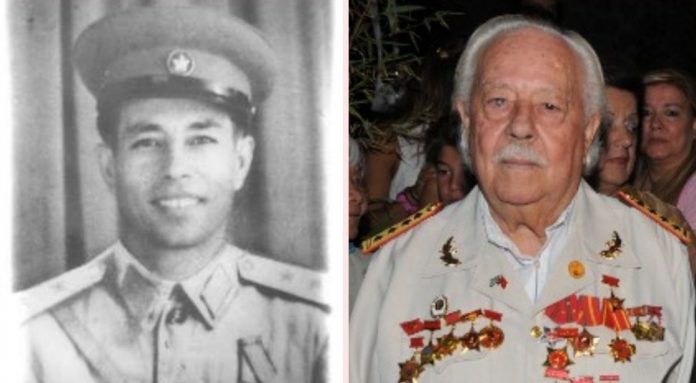 Born in Thessaloniki in 1927, Kostas was arrested during the Axis occupation of Greece and sent on foot to Nazi forced labour camps in Germany.

However, he managed to escape near Vienna and stole a military uniform which he used to disguise himself as a German until the end of the war.

After the end of the war, he found himself in France and joined the French Foreign Legion.

After two months with the Legion, he contacted Viet Minh spies and defected to them, carrying with him his rifle and a machine gun. He was given the name Nguyễn Văn Lập and served in various posts, participating in many battles. Eventually he rose to the rank of captain. In 1949, he was admitted to the Communist Party of Vietnam.

After the end of the war in 1954 and the division of Vietnam into northern and southern zones, Sarantidis moved to North Vietnam and retired from the army.

After his repatriation to Greece in the 1960s, Kostas joined the Communist Party of Greece (KKE) and worked for helping Vietnam as well as promoting Greek-Vietnamese relations.

In 2013, he became the sole foreigner honoured with the title of Hero of the People’s Armed Forces of Vietnam. Additionally, he has been awarded several honorary titles by both the Vietnamese Party and State, including the Friendship Order in 2011, the Victory Medal, Third Class and the Resistance War Medal, Second Class.

“Kostas Sarantidis’s life is tied in with the heroic moments of the Vietnamese people,” said Vu Binh, Vietnamese Ambassador to Greece.